What to Make of Romney's VP Pick? 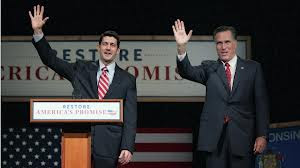 When we first heard that Republican nominee for President Mitt Romney chose Congressman Paul Ryan of Wisconsin as his running mate, many thoughts came to mind..

The first was a big, long, drawn-out Yukkkkkkk!

We thought something along the lines of , 'Seriously Mitt.. This ultra-fiscal conservative, tea-party lackey was the best you could do?'

For weeks via Drudge and other news outlets, the big teaser was Condoleezza Rice, former National Security Adviser during Bush's first term and his Secretary of State during the second.

Regardless of whether you agree with her politically, here's a very intelligent, accomplished individual with a good resume who also being both black and female, would have helped make strategic in-roads at some of Obama's voting blocs.

Then within the last week, the big rumor was another individual of accomplishment: former four-star General and current CIA Director David Petraeus, who arguably was the US' most successful military commander during the continual, on-going wars in Iraq and Afghanistan.

We will never know if either was ever asked to join the Romney ticket or if one or both politely declined... Still we thought at the choice of Paul Ryan was, 'Mitt is This the best you could do?'

Paul Ryan is most famous up to this point for proposing legislation back in early 2010 that aimed at tackling the US, growing, crippling debt called 'The Path to Prosperity'. 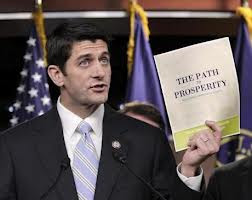 All well and good.

Problem was, his solution involved that famous fiscal conservative 1-2 punch of cutbacks in taxes for corporations and the wealthy, while also dramatically scaling back social safety nets or 'entitlements' (as elitists call them) such as Medicare & Medicaid.

No doubt his proposed legislation will be among the centerpieces of the election battle that wraps itself up over the next 2 1/2 months.   According to Yahoo Financial!, this is what they predict if a Romney/Ryan ticket is victorious in November:

"The Romney-Ryan economic plan will likely:

At a more detailed level, the Romney-Ryan plan will likely lead to the highest-income Americans paying less in taxes, while making lower- and middle-income Americans paying more (through elimination of tax deductions that disproportionately help these Americans). Earlier this year, the Tax Policy Center found that Romney's tax plan would reduce effective tax rates for the the richest Americans, and raise them for the poorest."

And these people act like everyday people's need to survive via these programs caused the massive debt spike, and not the Trillions upon Trillions spent in the last 4 years alone to bail out the financial sector..

And so we started thinking--  why would a Presidential nominee announce his first decision of any actual importance or significance on a Saturday morning when most of the nation is focused on 1,000 other recreational pursuits? 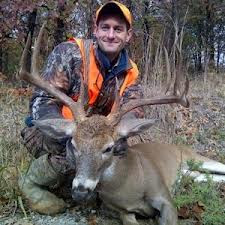 Say what you will about Sarah Palin, but when she was selected by Sen. John McCain, the excitement and energy that others thought she'd bring to the 2008 race meant her announcement was timed for the first day of the Republican Convention so it would be topic #1 and proudly so.

To select someone on a Saturday and two full weeks before Convention says both that Romney knows his choice is going to be deeply polarizing in matters of political substance meaning more time needed to break the guy in, and also one other factor...

Usually a VP pick is supposed to bring something to the table that the Presidential candidate lacks in some way, whether it be experience in a given area, represent a key voting demographic or fulfill sectional/regional differences.

This pick is eerily reminiscent of 2006 when Bob Dole was running against a strong incumbent in Bill Clinton, and the GOP base didn't think Dole was conservative enough, so he selected ultra-fiscal conservative Congressman Jack Kemp to try to appease them.

The move energized the Republican base but alienated just about everyone else and Clinton definitively won a second-term.

Over the weekend, we ran across an interesting posting on a blogsite entitled 'RightCondition' which seemed to reaffirm our opinion of why Romney made the selection with the title, "Mitt Romney's Selection Of Paul Ryan Is A Sign Of Desperation"

Can't get any more re-affirming than that.. 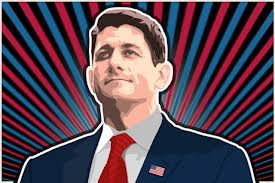 And we found interesting how upset the writer was in the choice, almost branding Paul Ryan a fake-conservative.. it actually gave us some optimism that Romney's pick isn't a total insensitive asshole...

"This pick is an indication that the Romney team is struggling and sees the prospect of winning in November diminishing with each passing day... It is desperation and an attempt to shake things up substantially in the hopes of energizing a splintered and unimpressed Conservative base...

"The famous Ryan budget (despite being all bark and no bite) was used to galvanize Obama and the liberal base.  Remember how Ryan's policies inspired the idea that he would throw grandma off the cliff?  ... Ryan's budget was nothing more than smoke and mirrors..

"Barry Goldwater was America's last libertarian-Republican candidate and he was obliterated because he dared to speak up against Social Security.  Barry's loss paved the way for the great society and the invention of Medicare and Medicaid.  How ironic.  Poll after poll shows that Americans refuse to accept changes to entitlement programs, despite their clamoring for someone to fix our debt.

"Romney and Ryan will lose in November and the image of the heartless Conservative killing granny will resonate with America, the tragedy of course is that neither Ryan or Romney are willing to actually cut anything!"

Brrrrr...  Super-Scary to probe deep inside the mind of an extreme fiscal conservative when someone like Paul Ryan seems too timid for them... 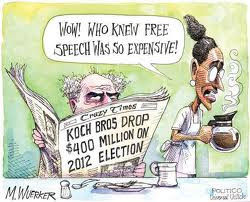 ~ The Koch Brothers finance and run the Tea Party; they own Paul Ryan

So in summary, what to think?

We at A&G have made it no secret we think Obama is a terrible president who's hookwinked the people on a fantasy of 'Hope' and 'Change' while doing little to nothing to fix the economy and help everyday people but somehow successfully portrays himself as battling Wall St and wealthy fat-cats.

And prior to choosing Ryan as VP nominee, we looked upon Romney basically as Obama's economic ineffectual equal.  Obama constantly courts and seeks approval from Wall St while Romney IS Wall St

But this selection by Romney is just horrible and the 'granny' reference mentioned above by the ultra-fiscal conservative, well.. sorry but its true.

The elderly can barely make ends meet as it is with the destruction of savings rates and freezes in cost-of-living increases...  Add severe Medicare cuts to the mix and you might as well campaign on a policy of elderly euthanasia. 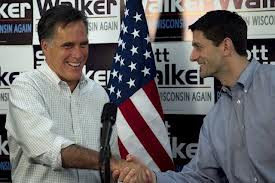 So we don't know what to tell you... another dark, depressing day in US politics..

We won't tell you how to vote but more and more its looking like many of us here at 'A&G' will be sitting this election out.