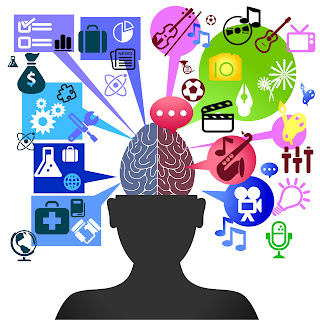 It's long been understood that certain functions in the brain are lateralised to the left and right hemispheres (which constantly communicate with each other via a thick bridge of nerve fibres called the corpus callosum). They may look like anatomical mirror images of each other at a macro level, but they receive and process different sorts of incoming sensory information.

Neurologist Roger Sperry won a Nobel Prize for demonstrating that the right and left hemispheres play distinct but complimentary roles in adult brains. He looked at patients who had had a callosotomy — where the two hemispheres of the brain are separated by severing the corpus callosum. Their brain is effectively 'split' in two. This procedure, another type of hemispherectomy, is sometimes performed on/in people with severe epilepsy, to stop the transmission of seizures between the left and right halves.

The split brain patients sat directly in front of a screen onto which, in essence, pictures or words were flashed on either side so that they were only processed by one half of the patients' brain.

When a word was flashed on the left hand side, the patient couldn't say what they'd seen because their non-verbal right hemisphere was left to make sense of the word alone, without the help of its verbal left companion. However, if they were asked to pick up an object behind a screen in front of them with their left hand related to what was on the screen, they picked up the correct object. This indicated that their right brain had in fact "seen" the object and directed their left hand correctly - it just couldn't help them say what they'd seen.

Other areas where the different hemispheres play specific roles are still being uncovered, but recent studies suggest that the left brain may play a part in human happiness and the immune system.

A research team lead by Richard Davidson investigated the effects of meditation on the brain, collaborating with no less than the Dalai Llama along the way. In one study a group of people who had never meditated undertook a two month course in mindfulness meditation. They showed a significant increase in activation in the left pre-frontal regions of their brain, associated with a reduction in the amount of anxiety they reported. Their immune system was also more robust, as demonstrated by their response to a flu vaccine.

"Our evidence suggests that individuals who exhibit greater activation in certain regions of the left prefrontal cortex have a more positive dispositional mood, that is, they are happier people", says neuroscientist Richard Davidson, co-editor of The Asymmetrical Brain, who scans the brains of people to explore the neurological basis of emotions.

Another interesting study published recently in the Annals of Neurology offers further insight into this potential connection between immunity, wellbeing and our brain's hemispheres. A team at Georgetown University Hospital in Washington D.C found that epilepsy patients who had surgery on the left side of their brain were more vulnerable to infection afterwards - they experienced "significant decreases in immune function". On the other hand, those who had surgery on their right hemisphere "saw the levels of their disease fighting cells significantly boosted". The researchers however caution that the results only apply to right-handed people, the outcome may be very different for left-handers.