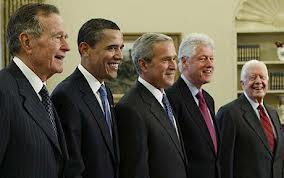 ~ President Reagan had passed away a few years prior to this photograph...

Because Part 3 became such a long process to research and write, we realized that we were going to have to break this up into two smaller parts.   Today we will grade the Presidencies of Carter, Reagan and Bush 41 in terms of their economic records. This will span a total of 16 years (1977-1993)

The conclusion to this academic exercise will be on completed and presented on Friday when the Presidencies of Clinton, Bush 43 and Obama will be addressed and analyzed.

Now during the period from 1977 to 2012, we've had 3 Democrat and 3 Republican presidents.  Different leaders-- different policies-- different ideologies and worldviews...

Ultimately there is one thing in commonality..  a continual drop in the quality of life for middle class to working poor commiserate with a dramatic rise in wealth and political power of the top 1%.

Some administrations were able to hide economic reality better that others. Eternal optimism and broad-smiling charm are always more appealing to voters than blunt honesty.

Think of it this way.. which parent is more popular to a child:  One who says 'It's time to go to bed' or the one who says.. 'Who wants more cake and ice cream??' 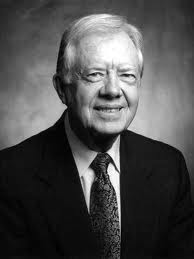 When Carter took office in 1977, the economy was in a major funk.  Four years later when he left office, the situation had not improved and he was voted out.

Now that's not to say Carter's presidency wasn't without successes such as creation of Departments of Energy and Education,  the Camp David Accords and the Panama Canal treaties.   The problem was that few to none of his achievements were economic.

Carter took office during a period of international stagflation, which persisted throughout his term.

In economics, stagflation is a situation in which the inflation rate is high, the economic growth rate slows down, and unemployment remains steadily high.  It raises a dilemma for economic policy since actions designed to lower inflation may exacerbate unemployment, and vice versa.

As a result of this, interest rates were extremely high during the Carter years which was great for savers but an absolute killer for those seeking to buy homes or automobiles, etc... anything that required repayment.

Stagflation in the US actually originated with Nixon who pushed forth a policy of price controls in 1971, which in direct conjunction with taking the nation off the gold standard, precipitated a decade long decline in the US economy which by the late 1970s, laid on Carter's lap to fix.

Unfortunately, he was not up to the task.

By 1980, Carter was so unpopular that Ted Kennedy was running against him in the primaries, making a strong showing and by the time Carter survived to face Reagan, he simply was no match with someone giving upbeat, optimistic visions of "Morning in America". 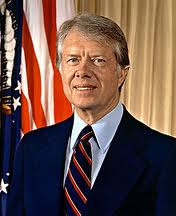 Carter would lose 49 of 50 states in the electoral college to Reagan in 1980, one of the biggest landslide losses in US political history.

The best way to understand that period if not lived through it, would be to rent the film "Miracle" with Kurt Russell about the 1980 Olympic champion hockey team.  You will get a good feel and understanding of the overall malaise that many felt back then, which was among the reasons that special team became so beloved and inspirational to the nation.

It was difficult to find any piece of legislation or policy of action Carter took to try to combat the stagflation.  He came across by many including long-standing Democrats to be a weak and ineffectual leader who lacked the ability to present an economic vision for the nation outside of common-sacrifice.

As a result, we gave Carter a very poor grade.

Carter could be called the last "True" Democrat President; one who did not compete with the Republicans as to how dramatically he could bend over backwards to court or alter public policy to appease the immoral Wall St for donations.

In other words, the Democratic Party of today is not your Daddy's party.

Its very difficult to be brief and concise when it comes to the Reagan Presidency but we will make every attempt possible...

Reagan was/is to the political right what FDR was to the left.. much beloved and he left an indelible imprint upon the political fabric which for better or worse, will be felt for generations.

To fiscal conservatives, Reagan was a genuine breath of fresh air.  He conveyed confidence, strength and an abundance of optimism an hope for a better tomorrow.  And though it took a couple years for his economic programs to lift the nation out of recession, for many the 1980's was a period of great economic prosperity.

Reagan believed in laissez-faire economics,  once famously stating essentially that government does not fix problems; it IS the problem.  So his remedy to get the economy in gear was intense tax cutting for wealthy (from 70% to 50% rates) and corporations, a simplified tax policy and coordinated with the Fed a dramatic slashing of interest rates to record lows to stimulate additional consumption.

His supply-side economic policies, were dubbed "Reaganomics", He also push forth deregulation of the economy, which allowed business on Wall St to dramatically expand their profits without the checks and balances which were in place before. 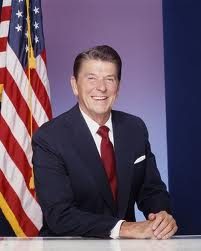 Reagan reduced government spending--buy mostly on the poor.  He certainly did not curtail spending on national defense, getting into an economic pissing contest with the Soviets as to see who could build up their weaponry as quickly and expensively as possible.

As a result. Reagan pushed the national debt up to over $1 Trillion for the first time in US history.  It seems like a paltry number when you think the national debt currently stands close to $16 Trillion.  But understand that at no time since Reagan has anyone made the attempt to pay back the debt to pre-Reagan figures.

For better or worse, Reagan showed while in office, all the benefits and none of the drawbacks of an economic policy of perpetually kicking the financial 'can' for future generations to deal with.

And really that's the problem with Reagan from an economic standpoint-- He was a great success as President because it is easy to spend and spend, when there's no sincere thought or consideration to paying back what is borrowed. 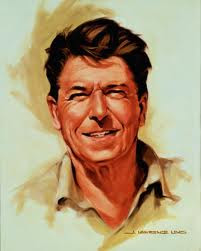 And brings us to credit cards which was such an important part of the overall economic growth of the Reagan years:  this heavy influx of personal credit cards pushed into the hands of everyday Americans which allowed the Reagan economy to grow and flourish.  There was a time credit cards were specialized; meant only for the very affluent.

But by the early 80s as wages were continually worsening in comparison to cost of living, a financial buffer was needed to give everyday people the means to stay afloat and compete with the well-to-do.


Legislation was passed which took power away from individual states to decide what APR a credit card could charge, instead stating the rate approved by the home state of a card issuer as a  nationalized rate with nationalized means of debt collection. And from this policy, once credit card issuers were fully protected, credit card use boomed.

So how to grade Reagan's economic policies fairly and free as possible from bias? That's the big question and task at hand... 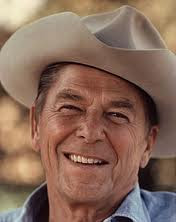 The economy Was better when Reagan left office than when he was inaugurated.  Unemployment was down, 16 million new jobs were created, and inflation significantly decreased.

But Reagan is a good example of the "Two Americas" problem which has steadily gotten worse into the present.  Reagan cut the budgets of non-military programs including Medicaid, food stamps, federal education programs and the EPA.

And while he protected entitlement programs, such as Social Security and Medicare, his administration attempted to purge many people with disabilities from the Social Security disability rolls.  Reagan also used the additional revenues collected by the increased Social Security taxes to pay for other programs and replacing the funds with IOU's (a practice All Presidents have done since, which is why there's talk of Social Security becoming one day insolvent even with the supposed increased revenue)

So once again... how to grade Reagan?  If you're a fiscal conservative, he gets A+++ and if you are a traditional Democrat, you give Reagan a D-.   We are neither.  We see Reagan's good but we've also seen over time the negative repercussions of such short-sighted economic policies.  So Reagan's economic policies get him a grade of B-. 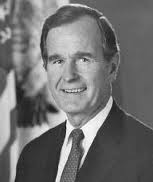 Bush 41 had many successes as President, mostly stemming from 'Operation Desert Storm' which at the time was criticized by many because he refused to invade Iraq.  History has shown that to have been a wise decision based on Bush 43's demonstration of what happened when invasion took place.

Economically though, Bush 41's Presidency was not a glowing success and his post-Desert Storm approval rating of 85% dropped dramatically as the nation was in a recession by late 1991, and ironically it was 6 blustery words uttered during a speech during  the 1988 Republican Convention which caused him to lose his base support and ultimately lose re-election:

Because of a deficit that had grown three times in size in just a 10yr period thanks to President Reagan's over-spending on defense and nuclear arms,  Bush was forced to go back on his campaign pledge and this alienated a large percentage of his fiscal conservative base who didn't seem to believe that higher taxes should ever apply to them.

As stated before, the US was in a mild recession in 1991-92 but by the time of election, unemployment had risen to 7.8% and 14.9% of Americans were now officially at poverty levels or below.

The true black mark on Bush's Presidency (one that eventually Bill Clinton would share when passed) was NAFTA-- the North American Free Trade Agreement. 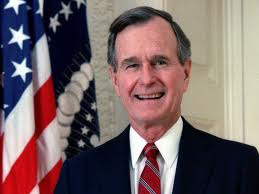 The treaty was supposed to eliminate the majority of tariffs on products traded among the United States, Canada, and Mexico, to encourage trade amongst the countries and remove investment restrictions among the three countries. The promise (or lie) was that NAFTA was going to create millions of new jobs for Americans.

President Clinton would go on to make the passage of NAFTA a priority for his administration, despite its conservative and Republican roots – with the addition of two side agreements – to achieve its passage in 1993

Proponents of NAFTA have always maintained it was a success but tend to ignore the dramatic decrease of good-paying jobs as a result.

Clinton gets blame for signing it but Bush 41 gets equal blame for negotiating it.

It is mainly for the NAFTA and lack of any clear economic policy to grow the economy while being so singularly focused on foreign policy issues, that it is impossible to give Bush 41 an economic grade higher than D+
~ * ~    ~ * ~    ~ * ~
We conclude on Friday with part 4: Clinton, Bush 43 & Obama
Posted by dsasR at 2:50 PM