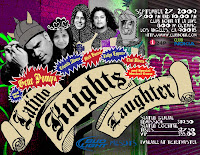 Presented by Budlite, i24P and Club Nokia, Latino Knights of Laughter will be taped for future broadcast. Directed by Adam Mischler, LKOL is being produced by Dennis Kornegay of i24P with renowned Latino comedy star, Gene Pompa of 'Late Night' with Conan O'Brien, 'Late Late Show' and Comedy Central hosting and headlining.

"Our focus with this project," says Pompa "is to both bring attention to and provide a showcase for the next generation of Latino comedy talent. We are hoping this will be the first of many such events and are proud to have Cristela Alonzo, Felipe Esparza, Thai Rivera and Nick Guerra as part of this first show."