Neo Noir, One In The Gun, brings a little horror to the screen

Neo Noir, One In The Gun, brings a little horror to the screen

Horror film fans will rejoice as Kanefsky gives his latest flick "One In The Gun" a bit of gore...

Hollywood, CA (PRWire) (5/28/08) - On first pass, Rolfe Kanefsky's latest flick, the noir-thriller "One In The Gun" seems to be a gentle ride for this King of Horr 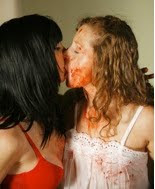 or, but standing on set watching a graphic scene of lead actor Steven Man ("Savage Island") lying prostate, hands and feet bound to the bed posts, getting his chest clawed open by the long, searing talons of his two co-stars - Latin America's latest, gorgeous gift to the USA, Columbian-born Kika Perez and the not-so-innocent, stunning coquette, Dana Fares, who are straddled across his groin savoring in the delicacy of his blood and their lust for one another, one realizes this film is anything but an ordinary film noir.

"One In The Gun", currently lensing in greater Los Angeles, follows a trail of greed, lust and murder. In a sleepy house, a murderous secret lies dormant until the perfect patsy falls into place. Crafting her charm to it's ultimate perfection, femme fatale Katrina Webb (Katherine Randolph) seduces a seemingly innocent painter to do her bidding. Will her lover (Stephen Williams) or her husband (Steven Bauer) be the target? What game is best played with three men at once?

in the stolen behind the scenes photographs... you want blood? Gore? Stunning women? You want to see "One In The Gun" (http://www.imdb.com/title/tt1217059/).

Robert Davi Joins Cast of Neo-noir "One In The Gun"

Robert Davi Joins Cast of Neo-noir "One In The Gun"
Internationally renowned actor from James Bond, Goonies and Die Hard joins cast of Lynchian thriller, "One In The Gun". 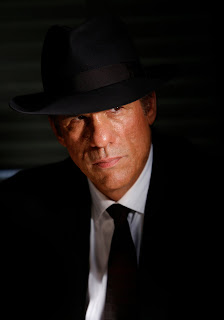 HOLLYWOOD, CA– It’s a scorching afternoon in the middle of California’s high desert and the tall, striking, multi-award winning actor Robert Davi strides onto the legendary 4-Aces film set, to kick off filming director/writer Rolfe Kanefsky’s latest flick, “One In The Gun”. Davi’s creation of the devilish noir character Vincent, comes with absolute fluidity: an ex-con with a penchant for axes whose penetrating laughter is as sinister as his stare.

Instantly recognized from both film (“James Bond: License To Kill”, “Goonies”, “Die Hard”, and “Hot Chick”) and television (“Profiler”, “Stargate: Atlantis” and “Huff”), Davi, has been very successfully touring the festival world with his feature film directorial debut “The Dukes” while filming David Zucker’s “An American Carol” with the all-star cast of Kevin Farley, Kelsey Grammer, Jon Voight, Dennis Hopper, Leslie Nielsen and Kevin Sorbo and locking down his role in Max Ryan’s “The Hunchback” with John Rhys-Davies.

“One In The Gun” (http://www.imdb.com/title/tt1217059/) revamps the classic noir genre with a modern flair, while paying tribute to such masters as Billy Wilder (Double Indemnity), Lawrence Kasdan (Body Heat) and David Lynch (Mulholland Dr.). A deliciously dark tale of one man’s desperate spiral into an endless, personal hell; private investigator Mickey Lewis (Steven Man) discovers that it only takes “One In The Gun”. Can Mickey stay focused on his mark? If he pursues love over logic, can he win this game of manipulation against a femme fatale that knows no bounds?

Steven Bauer joins the cast of "One In The Gun"

Steven Bauer joins the cast of "One In The Gun"
Noir thriller, brings classic back.
Hollywood, CA - Steven Bauer, widely celebrated for his turn in Scarface with Al Pacino and Steven Soderberg's Traffic has joined 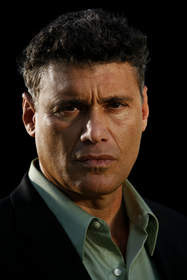 the cast of Rolfe Kanefsky's latest flick, the neo-noir thriller One In The Gun currently lensing in Los Angeles under the stylistic eye of Director of Photography Gigi Malavasi (A Simple Promise, Broken Idyll).

One In The Gun is a sexy brain teaser of a thriller with nods to classic film noir of the past mixed with a post-modern flair of David Lynch-style surrealism and surprises.

About the film:
When Mickey Lewis (Steven Man), a homeless struggling artist, crosses paths with femme fatale Katrina (Katherine Randolph), the beautiful rich wife of Arthur Webb (Steven Bauer) and is enlisted to paint their home, a dark game of manipulation and seduction ensues. Soon hidden agendas result in double and triple-crosses that spiral Mickey’s life out of control leading him to a motel in the middle of nowhere filled with eccentric characters (Robert Davi, Robert Donovan, James Russo) and twisted secrets that all hold the key to the mystery of Mickey’s past, present, and future.

One In The Gun is expected to be released 2011.