Mobile provides ultimate platform for “Atomic Dreams: The Lost Journal of J. Robert Oppenheimer” -- a cautionary tale for all nations
Hollywood, CA (07/09/09) – The rising swell of fear surrounding the imminent threat of atomic warfare has once again become commonplace in our daily news. Organizations such as Global Zero have partnered with the most significant politicians and celebrities of our current culture to draw attention to what dangers lie ahead, if left unchecked. 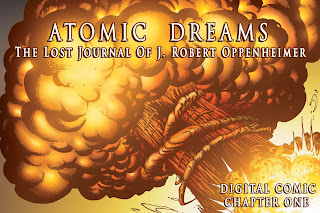 Inspired by this movement, three men, Jazan Wild (founder Carnival Comics, comic creator, writer, songwriter/musician), Jonathan Elias (co-creator, producer, composer & creator/composer of Global Zero’s "1000 Suns") and David Uslan (producer, co-founder COG1 Entertainment) combining extraordinary talents and values have created a seemingly innocuous comic book that shares a salient message with every Smart Phone user from North America, to Europe and soon Asia (including China): if we do not learn from our past mistakes, we are destined to make them again -- namely the atomic bomb.

On July 4, 2009, deliberately on American Independence Day, Carnival Comics, released one of the first-ever digitally-delivered comic books to the mobile world: “Atomic Dreams: The Lost Journal of J. Robert Oppenheimer.” The comic is first running on RIM Technology’s Blackberry and Google’s Android, and will be followed by both Apple’s iPhone and Nokia next week. “Atomic Dreams” will mark the third-ever comic to be delivered via Blackberry (the first two were also Carnival Comic properties) and the first-ever on the Nokia. Additionally, Carnival Comics has just been notified that “Atomic Dreams” will be the first-ever digitally-delivered comic book in China, a launch that is expected next month.

J. Robert Oppenheimer was a brilliant man and a father, yet he referred to himself as “the destroyer of worlds.” Did he know what he was creating when he set forth to develop the atomic bomb? Did he fully understand the scope of horror that he would unleash? “Atomic Dreams” filters through Oppenheimer’s inner torment and, in the most visual manner, appeals to today’s youth to take heed from the painful lessons of the past.

“People have taken notice,” says producer Uslan of Wild and Elias’ “Atomic Dreams” creation, “from Hollywood studios that are lobbying to make this comic book into a full length feature film, leading politicians on Capitol Hill, to e-mails from young adults across the nation. The immediate response is a powerful confirmation that we are not alone in wanting to save our world and future. Jazan Wild and Jonathan Elias are creating more than simply a story; they are stirring the cauldron of awareness.”