Her Royal Highness Princess Theodora of Greece and Denmark Honored As Outstanding Role Model by Academy of Couture Art at the 2010 Grand Fashion Gala held in Beverly Hills, California, USA.

The evening celebrated the educational and practical achievements of ACA's inaugural program. "We feel that Princess Theodora truly embodies our greatest hope for the future of today's youth - grace, intelligence and positive self image. To be a highly visible young woman who is following her dreams with the strength of her education behind her -- she is an inspiration to all of us," said Sonia and Thierry Ete, founders of the Academy of Couture Art.

Her Royal Highness, Princess Theodora of Greece and Denmark is the daughter of King Constantine II of Greece and his wife Anne-Marie of Denmark.

The Princess attended Woldingham School, situated in Surrey, England. From there she moved to the United States where she received her Bachelor of Arts in Theatre Arts after having attended Northeastern University in Boston for two years.

While in Boston she completed the four-year course at Brown University and followed with graduate studies at Central Saint Martins College of Art and Design.

At present HRH Princess Theodora is based in Los Angeles to pursue a career in acting.

JOIN THE STARS IN SUPPORT OF PAT TILLMAN FOUNDATION 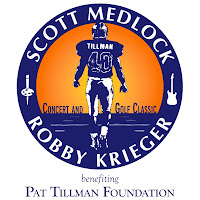 "We are honored that so many of our friends are returning to participate and we are looking forward to meeting many new faces - this is a particularly special year for us as Pat is being inducted into the College Football Hall of Fame," said Scott Medlock event co-founder.
Co-founder Robby Krieger of The Doors fame, concurs, "This is going to be an extraordinary year. The Pat Tillman Foundation changes the lives of people every day, and our goal is to contribute to their being able to do that."
The stunning Moorpark Country Club will be the site of this year’s tournament with world renowned comedian Gary Mule Deer as emcee of the day and evening festivities. Many celebrity supporters have already confirmed including last year's winning stars of George Lazenby (aka James Bond from "Her Majesty's Secret Service") and Scott Elrod (Jennifer Aniston's co-star in this Summer's blockbuster "The Switch") the close second, and almost winners of the hole-in-one grand prize of four new 2010 Mercedes-Benz from W.I. Simonson Mercedes-Benz Stephen Bishop (Brad Pitt's co-star in the upcoming "Moneyball") and TNT's Aldis Hodge from "Leverage."
Also returning this year are many keystone sponsors including W.I. Simonson Mercedes-Benz; Monster Energy; Moorpark Country Club; Golf Channel; Best Buy; Ketel One Vodka; Santa Paula Chevrolet; Gibson Guitars; Anheuser-Busch; Loud Mouth Golf; Tommy Bahama Rum; Stolichnaya vodka, Manchester Financial; John Carson Foundation; Titleist; Harley-Davidson; HUB International; Hill Financial Advisors; B3DigiGrafx; Nocture Productions and Popular Press Media Group (PPMG).
Scott Medlock, friend of the Tillman family, said of Pat, "Pat (Tillman) gave up a $3.6 million dollar contract with the NFL-Arizona Cardinals to go fight for our country. Pat unfortunately lost his life while serving in Afghanistan in 2004.”
In June, the Pat Tillman Foundation awarded 60 men and women with the distinction of being named Tillman Military Scholars for 2010. This deserving group was awarded $720,000 in scholarship support to complete their educational goals at 31 universities across the country. Since the program launched in 2009, 112 Scholars have received over $1.3 million in scholarships. The Tillman Military Scholars program funds scholarships to veterans, active servicemembers and their dependents, especially those who have been impacted by the Iraq and Afghanistan wars. Currently Tillman Military Scholars represent nearly every branch of the armed forces: Army, Navy, Marine Corps, Air Force, National Guard and Reserves.
The event, in its third year is part golf invitational, part private celebrity rock concert as co-founder Robby Krieger of The Doors fame takes the stage, inviting along some of his celebrity friends for an impromptu, unforgettable night of music and ultimately great fun, celebrating one of America's heroes: Pat Tillman, who's legacy touches the lives of countless American's on a daily basis.
For more information on the 2010 Scott Medlock & Robby Krieger Celebrity Golf Invitational and Benefit Concert, please contact media@ppmg.info, or call (310) 860-7774. You can also log on to http://www.PatTillmanBenefit.com/
2010 Sponsor Packages and Concert Tickets are available.
# # #
Posted by dsasR at 2:27 PM No comments: