Hollywood, CA (02/12/07) -- North Carolina can be very proud of itself today as a movie that was financed, filmed and partially cast within the State swept the International Family Film Festival, taking home three awards including the coveted "Spirit Award" for the film that captured the true essence of a family film; the "Audience Award" celebrating the film most enjoyed by attending audiences and the "Best Child Actor in a Supporting Role" which was awarded to Aidan Mitchell. 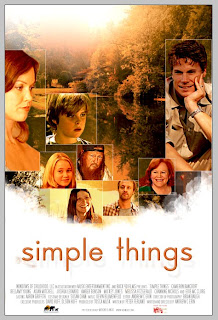 "Simple Things" champions the heart of America; the pulse that resonates through every individual, recognizing that beyond the complexities of life, the simple things are the most important. Through the looking glass of the film, audiences are given a serious, yet very entertaining, bird's eye view of some of the moments that renowned pediatrician Dr. Olson Huff (Lewis Hine Award Recipient) experienced in his career of caring; evoking in many a new awareness and sensitivity to the world around them.

The film stars Cameron Bancroft ("Love and Human Remains," TV's hit series, "24") as Dr. Evan Gibbs, who takes his 10-year-old son, Nate (Aidan Mitchell, FX's "The Riches"), to the Blue Ridge Mountains of North Carolina after the sudden death of his wife to cancer to set up a medical clinic in the small town of Dunn's Rock. Through the support of the town's mayor, Terry Hudson (Bellamy Young, "Mission Impossible III") and her daughter, Christina (Channing Nichols, "Six and The City"), Dr. Gibbs and his son discover more than they expect.

Helmed by award-winning director/writer Andrew C. Erin ("Sam's Lake"), under the experienced eye of award-winning Producer Tosca Musk (Musk Entertainment www.muskentertainment.com), "Simple Things" has launched far more than Executive Producer David Huff's North Carolina production company Back 40 Films (www.back40films.com), it has put the spotlight on the vast and valuable motion picture business as being a viable industry for North Carolina. Back 40 Films and Musk Entertainment are teaming up next on "American Racer."

A dedicated and committed cast, including Joshua Leonard ("Blair Witch Project"), Amber Benson ("Buffy: The Vampire Slayer"), Mickey Jones ("Sling Blade"), Melissa Fitzgerald ("West Wing"), Zac Gardner ("Akeelah The Bee") and Edie McClurg ("Ferris Bueller's Day Off"), a beautiful story and a hard-working, skilled crew, "Simple Things" is a return to the true essence of family entertainment, and is poised to capture the hearts and minds of audiences worldwide!

Further information about the film may be found by visiting www.simplethingsthemovie.com or www.ppmg.info