Lauren Maher heats up the screen as “Scarlett” in Pirates of the Caribbean: At World’s End!

Lauren Maher heats up the screen as “Scarlett” in Pirates of the Caribbean: At World’s End!

Lauren, who plays the sultry, red-headed siren, “Scarlett” was exuberant talking to reporters, 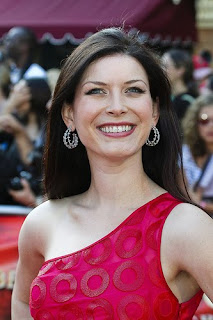 reminiscing about her favorite moments filming the record-setting blockbuster and even sharing insider tidbits about her onscreen co-stars Johnny Depp and Orlando Bloom, “Does it get any better than that?!” she quipped to the media in the guiness book of world records longest red carpet that wove its way down Disneyland's Main Street USA. Maher, wearing a stunning claret red, Feraud couture gown with House of Taylor diamond earrings and diamond cuff, went on to say... "do you think Dame Elizabeth Taylor would mind terribly if I borrowed these pieces for a few years?!"

The crowds seemed to be in agreement, what would a pirate movie be without wenches?! Lauren and onscreen partner-in-crime (and off-screen best friend) Vanessa Branch, endlessly signed autographs for fans and encouraged both viewers and readers alike to join them this weekend in heralding in the final installment of the trilogy.

“I have loved being part of this film, it has been one of the greatest experiences in my life, having an opportunity to work alongside such an amazing team, Gore Verbinski is an extraordinary director and then to be able to connect with the fans, it has been and is – unparalleled.”

Next on deck for Ms. Maher? The lead role in a romantic drama entitled, "I Thought You Were Dead" and a horror film, "33 Griffin Lane".

For more information on Lauren Maher, please go to www.laurenmaher.com.