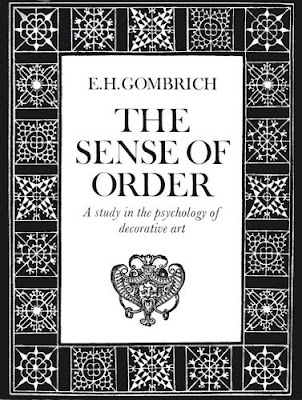 The Sense of Order: A Study in the Psychology of Decorative Art (Wrightsman Lecture Series) by E. H. Gombrich
This book provides a comprehensive survey of the history and theory of decorative art. The universal human impulse to seek order and rhythm in space and time can be seen in children's play and in poetry, dance, music and architecture, and its prevalence in our every activity calls for an explanation in terms of our biological heritage.

The Sense of Order: A Study in the Psychology of Decorative Art by E.H. GombrichPublished by The Phaidon Press, London, 1979

Gombrich's new book, The Sense of Order, is concerned with the psychology of decorative design and the creation and function of formal orders in the visual arts. This work was planned as a companion to the writer's Art and Illusion, published nearly twenty years ago: a book that deals with the psychology of representation. Whereas Art and Illusion treats mainly painting and sculpture of European origin, The Sense of Order is more wide-ranging. In fact, one of its outstanding features must be the bringing together of illustrations of design from cultures very diverse in space and time. Gombrich devotes attention to a Maori tattooed head at one moment; to a William Morris wallpaper pattern at the next; and, later in the same chapter, to ornament on a Japanese bottle. (At one point he uses to illustrate a point a work by the New Zealand painter Gordon Walters.)

In typical Gombrich fashion, each work discussed is illustrated; and to make reading and looking as convenient as possible the book is designed to have text and figures together on the same page. Obviously Gombrich has studied the psychology of the art book in the light of his own theory of the sense of order.
Gombrich starts his discussion of the decorative arts not by asking what has been done, but why. He wants to know why man makes, and takes pleasure in making, simple geometric shapes which stand out against what he calls 'the pleasing medley of the natural environment'. To explain this he argues the case for an in-built sense of order in each of us, against which we test our experience. He uses a number of examples to show what he means. One is our sense of balance, which enables us to stand upright without falling, and without conscious effort.

Gombrich states that there is 'an observable bias in our perception for simple configurations, straight lines, circles and other simple orders and we will tend to see such regularities rather than random shapes in our encounter with the chaotic world outside'. It is against this perceptual bias that we sort out, probe and categorise visual experience. Gombrich writes: 'If I were asked to sum up the theory underlying this book it would be that groping comes before grasping or seeking before seeing. In contrast to any stimulus-response theory I would wish to point to the need to regard the organism as an active agent reaching out toward the environment, not blindly and at random, but guided by an inbuilt sense of order'.

Using this theory Gombrich then proceeds to explain how the sense of order is a pre-requisite for perceiving disorder and breaks in regularity. He argues that'... if we lacked that sense of order which allows us to categorize our surroundings according to degrees of regularity, and its obverse' we could never have gathered any experience of the world. For him, too, this is the explanation of our delight in man-made orders such as pattern and decoration of varying degrees of elaboration. Obvious or readily understood orders such as a wallpaper design give pleasure as decoration because they place few demands on us. More complex designs (such as the carved decoration of the Alhambra, Granada) allow various levels of understanding. He writes of this: 'We are confident that we are facing orders within orders which would respond to our probing for regularity without making us lose the feeling of infinite and inexhaustible variety'.

Gombrich's discussion involves him in tracing the functions of ornament, the meanings it has acquired, the theories and criticism to which it gave rise. Also he traces the persistence of various forms throughout thousands of years of cultural change leading him to a strong sense of tradition in decorative design. Although he ends on a note of criticism of novelty in contemporary design, his study comes up-to-date with discussions of examples of Op Art and the influence of the computer on the decorative arts.

This book is undoubtedly destined to be, like Art and Illusion before it, an indispensable reference work. Despite the complexity of the issues with which it deals, it is always clearly written, and the theoretical apparatus is backed up at all times with examples. The Phaidon Press have taken great care in the production, and the book is lavishly illustrated and laid-out with an eye to both function and a handsome appearance.