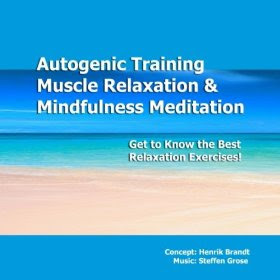 "Autogenic training is a relaxation technique developed by the German psychiatrist Johannes Heinrich Schultz and first published in 1932. The technique involves the daily practice of sessions that last around 15 minutes, usually in the morning, at lunch time, and in the evening. During each session, the practitioner will repeat a set of visualisations that induce a state of relaxation. Each session can be practiced in a position chosen amongst a set of recommended postures (for example, lying down, sitting meditation). The technique can be used to alleviate many stress-induced psychosomatic disorders.

Schultz emphasized parallels to techniques in yoga and meditation. It is a method for influencing one's autonomic nervous system. Abbe Faria and Emile Coue were the forerunners of Schultz. There are many parallels to progressive relaxation. In 1963 Wolfgang Luthe discovered the significance of "autogenic discharges", paroxistic phenomena of motor, sensorial, visual and emotional nature related to the traumatic history of the patient, and developed the method of "Autogenic Abreaction". His disciple Luis de Rivera, a McGill trained psychiatrist, introduced psychodynamic concepts into Wolfgang Luthe's approach, developing "Autogenic Analysis" as a new method for uncovering the unconscious.

Herbert Benson, MD, a Harvard professor also did significant research in the area. He called it the Relaxation Response and wrote an influential book with that same title.

Example of an autogenic training session

9. Finish Part One by cancelling

10. Start Part Two by repeating from step 2 on to cancelling

11. Start Part Three by repeating from step 2 on to cancelling

When you end your practice, it is a good idea to cancel, to avoid your thoughts from inadvertently materializing. To cancel say "arms firm," and move your arms vigorously; say "breathe deeply," and breathe deeply; and say "open eyes," and open your eyes.

Many practitioners will choose not to cancel between the three iterations, in order to maintain a deeper relaxation.

Quite often, one will ease themselves into the "trance" by counting to ten, and exit by counting backwards from ten. This is another practice taken from progressive relaxation.

Autogenic training restores the balance between the activity of the sympathetic (flight or fight) and the parasympathetic (rest and digest) branches of the autonomic nervous system. This has important health benefits, as the parasympathetic activity promotes digestion and bowel movements, lowers the blood pressure, slows the heart rate, and promotes the functions of the immune system.

Autogenic training is contraindicated for people with heart conditions or psychotic disorders.

Autogenic training has been subject to clinical evaluation from its early days in Germany, and from the early 1980s worldwide. In 2002, a meta-analysis of 60 studies was published in Applied Psychophysiology and Biofeedback, finding significant positive effects of treatment when compared to normals over a number of diagnoses; finding these effects to be similar to best recommended rival therapies; and finding positive additional effects by patients, such as their perceived quality of life.

In Japan, four researchers from the Tokyo Psychology and Counseling Service Center have formulated a measure for reporting clinical effectiveness of autogenic training.

Autogenic training was popularized in North America particularly among practitioners by Wolfgang Luthe, who co-authored, with Schultz, a multi-volume tome on Autogenic Training. Luthe was a firm believer that autogenic training was a powerful approach that should only be offered to patients by qualified professionals.

Like many techniques (progressive relaxation, yoga, qigong, varieties of meditation) which have been developed into advanced, sophisticated processes of intervention and learning,

Autogenic training, as Luthe and Schultz wrote in their master tome, took well over a year to learn to teach and over a year to learn. But some biofeedback practitioners took the most basic elements of autogenic imagery and developed "condensed" simplified versions that were used in combination with biofeedback.

This was done at the Menninger foundation by Elmer Green, Steve Fahrio, Patricia Norris, Joe Sargent, Dale Walters and others, where they took the hand warming imagery of autogenic training and used it as an aid to develop thermal biofeedback."
Posted by dsasR at 12:41 PM