Speaking of Forensic Phrenology, lo and behold, here's a World News flash torn from the internet: 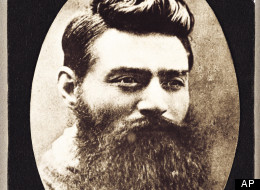 The missing head of Australia's most infamous outlaw, a Down Under contemporary of Jesse James who also became a folk hero in his country, may have been found in the cupboard of a self-described witch in New Zealand.

The Herald On Sunday reports that Anna Hoffman, 74, says she was given the skull by a security guard 30 years ago while on vacation in Melbourne. She said she was told it was "Ned's head."

Ned Kelly became a legend for raising hell in the outback in the late 19th century, the Telegraph explains. The Kelly gang roamed the countryside, robbing banks and killing three police officers in a crime spree that earned them a bounty of 8,000 pounds on their heads -- at that time the largest reward ever offered in the British Empire.

The gang's crime spree ended in 1880 in a gun battle with police in Glenrowan in the southern state of Victoria. Three members were killed. Kelly was captured and soon hanged.
The gang leader's body was thrown into a mass grave at Melbourne's Pentridge Prison and remained missing for the next 130 years. In 2009, a developer on the property discovered the remains of two dozen prisoners, the Telegraph writes.

DNA tests using a blood sample from a Kelly descendant identified one set of remains as Kelly's, according to the IB Times. But the bushranger's skull was missing.
Now, after a plea by Kelly's family to hand back the head so he can be finally given a proper burial, New Zealand great-grandmother Anna Hoffman says she has the missing noggin.

"We got talking about skulls and the next day he turned up with this skull," Hoffman described her meeting with the security guard to the Herald. "He said it was Ned Kelly's skull, and told me to 'put it in the bottom of your bag and wrap it up.' "

Hoffman did as she was told, adding the skull to more than 20 she has collected over the years. She said she would return the skull in question if tests show it is his.

If so, the notorious bank robber may finally get a decent burial more than 130 years after he died.
However that remains to be seen. Gina McFarlane, an Aukland University forensics expert, said wires attached to Hoffman's skull suggest it had been used in teaching and thus is less likely to belong to the outlaw, according to the Sidney Morning Herald.

And in 2009, a farmer claimed he had Kelly's skull, which he said he kept in a tree stump for three decades after it was stolen in 1978 from a display case at the Old Melbourne Gaol. Tests showed the skull belonged to another prisoner, the Telegraph notes.

If that's the case and DNA tests don't match the rest of the skeleton, the mystery of Ned Kelly's missing head may remain just that.
Posted by dsasR at 8:41 AM