The Mindset of a Slave 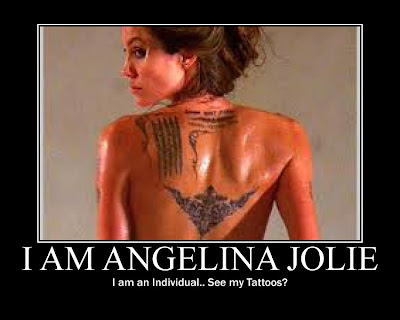 When we think of slaves, what pictures conjure up in the mind?

Usually, the most popular modern example would be that of the black slave in the American south of the 18th & 19th century who prior to the Civil War, worked on plantations for their masters.  They'd toil all day and night for no wage, and if they tried to escape, they'd be beaten and branded with hot irons and other such punishments...

Historically, the popular example would be that of the Roman slave, so worthless in the eyes of the greater society, that they would be used as tools of sport in the infamous Gladiator games, where crowds would cheer on the lions to tear the slaves apart to pieces, just for fun.

Biblically, the popular example would be the Hebrews of Exodus in the Old Testament.  Held as slaves in Egypt for over 400 years and forced to build the great Pyramids among other things, then later feared by their rulers, edicts passed to kill off their male offspring.  Later according to the Bible, Moses appears, there's a burning bush, 10 plagues and so forth.

They were all slaves from the standpoint of having their physical freedoms controlled, but were they 'slaves' in the True sense of the word?

A true slave is not a person who has been shackled, beaten, tortured, and made to comply under threat of death.  As long as there is a spirit of rebellion desire for freedom or something better, one is not imprisoned fully.

"As long as the mind is enslaved, the body can never be free" 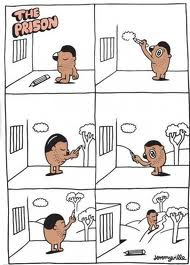 A true slave enjoys their subservience.  He/she is weighted with fear by the very idea of independence from the system, and who would actually fight and die to maintain the establishment which enslaves them.  A true slave is not able to imagine living any other life beyond his micro-managed existence.

A true slave don't simply defend its master or the apparatus holding him/her in place in a physical sense, but intellectually as well, by displaying a rather offensive lack of intellectual curiosity.

A slave will not only choose to overlook the truth, but when presented with information in a clear, concise manner how he/she is a slave, it will be shrugged it off because it is contrary to mission to fulfill private delusions.  If Truth is not useful, positive or uplifting, it is discarded.

There are 5 basic keys which define a true slave:

1  The Obsession With The Law

The slave mentality requires a foundation to hold its belief systems together.  The laws of governments tend to suffice.  These laws may go completely against the force of inherent conscience, but because the slave has already abandoned listening to his inner voice of reason, this does not bother him much.  Oligarchs understand that the law provides the slave with a means to rationalize his participation in the crimes of the state. 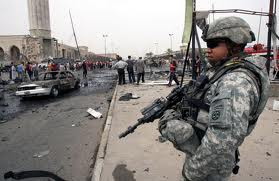 War is a good example.  Government, legislatively or through executive privilege, decide that the nation of X is an enemy and it is now completely legal and justified to kill their people by any means necessary as of the effective date of the beginning of military action and to magically cease killing at a specific point pre-determined on a calendar.

It is no accident that the primary goal of military basic training is to quickly stomp out individuality in thought as quick as humanly possible.

2  The Need To Be Accepted

A slave needs to fit in.. to be part of something larger than themselves and will alter their physical appearance and inner-ideologies to fit into the majority. As long as the slave feels as though he is a part of the machine, and accepted by the group, he/she cares not what the machine does to others.  And if the government is violent, cruel or restrictive to a smaller segment of the population, the slave will rationalize policy rather than question it. 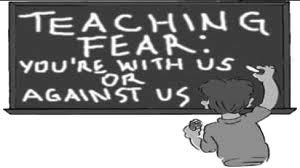 Who wants to be perceived as 'unpatriotic'?  Who wants to aid the 'terrorists'?  Remember that adorably cute George W. Bush saying, "If you're not with us, you're with the terrorists"?  Remember how Bush and the disgusting corporate media pushed the agenda that by altering your life in any way post-9/11 you were letting the terrorists win?

Thus, by travelling to Hawaii and visiting Neiman Marcus, etc; shopping and buying shit you didn't need with money you didn't have for momentary personal gratification, you weren't just being a thoughtless, self-centered jerk..  you were being a Patriot!

And do you remember how government told you the "Acceptible" ways to respond to 9/11 -- 1) Donate blood;  2)  Donate money  3) Go back to living normal lives i.e. shopping.   Any other "Unacceptible" outward expressions of rage, pain or fury would be quickly stomped out by the full police force of the US federal, state & local governments.

And don't get us started on this terrible Celebrity culture and the need to emulate vapid 5th tier nobody nothings because they're 'famous'...

3  The Need For Control

The average slave loves tyranny because it affords a perceived seat at the table of power, perhaps for the first time in one's entire life.  Collectivist slaves are often people who have felt weak and inadequate since childhood.

While honorable human beings fight this personal uncertainty by strengthening themselves physically and mentally, and improving upon their own character, the slave takes the easy route by joining with bureaucracy and living vicariously through its conquests.  Through the state, the true slave has the ability to “show the world who’s boss”, and get revenge for a life filled with meaninglessness. 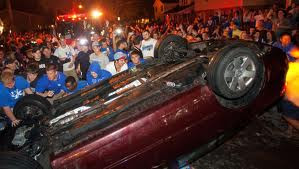 Sports are an excellent example of this though to many, it may seem like a harmless exercise, to passionately cheer on their 'team'.  But really one must break the components down-- You have a sports franchise (doesn't matter the sport), and it could be based in NYC, Barcelona or Manchester.  And though the franchise is a privately run corporation that has no direct ties or allegances to the location which it conducts business, the people emotionally bond and that corporation becomes their identity.

And it doesn't matter if an athlete is a child molester, dog killer or serial rapist, as long as that person wears "our" uniform" and helps "our" team win the "Big Game", then ultimately, nothing else matters.  And any officiating call, even if correct is drowned out by thousands of screaming Boooos if dared to go against "our" team when playing in friendly confines.  And our civic pride is prominently displayed by purchasing clothing covered with corporate trademarked logos.

4  The Need For Structure

An individual takes responsibility for him/herself, learning over time to provide one's own structure which works at his pace and serves his unique needs.  A slave does not have the energy or the drive to do that, and so, asks the establishment to tell him how he/she should live.

A true slave will hold at face value the word of nearly anyone in a position of petty authority.  When confronted with those who go their own way, or who rebel against the cookie-cutter template for social participation, the slave sneers in disgust.  Independent rebellion is abhorrent because the system provides him or her with their very identity.  To insult the fabric of the system is to insult who the slave is. 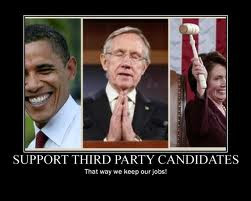 Many, many examples of this but for brevity-sake, it would include those who passionately support the Patriot Act vs those who question its unconstitutionality, and the public reaction to any 3rd party or political movement whether it be when Ross Perot and Ralph Nader ran for President vs the Dems & Reps or the current Tea Party and ''Occupy" Movement.

Now both are as diametrically opposite ideologically as two movements can be, but both were created organically (though the Tea Party eventually was corrupted and taken over by ultra-fiscal conservatives like the Koch Bros. for a few years now), the people who support both movements are passionate & genuine in the belief of their causes and 'change'. And to the mainstream, both movements are fringe and full of kooks.

5  The Need For Vindication

Sometimes it is not enough for certain people to have their own world view.  The slave seeks approval for his world view at every turn and will go so far as to force others to agree with it so that they can feel safer in their beliefs.  It is natural for people to seek out others with similar views and ideals, but not for those same people to use the government apparatus as a weapon to frighten the rest of us into submission just so they can become more confident in their philosophies.  Slaves want a world without contradiction.

Its funny what people tolerate.  You may say anything or believe anything you wish as long as it falls within acceptable parameters.   Cross those lines and people will want blood.

What is the most popular and stupid response a person will say when hearing another overly-critical of the US and its policies??

"Love it or leave it" 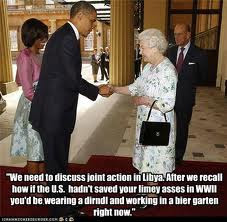 And what is the most popular and stupid response an American will say to a Briton, French or most other western Europeans who may be critical of the US and its policies??

Basically, something like, "If we didn't have to come over there and bail you out during WWII, you'd all be speaking German..."

In Summary:  Freedom is an exercise of the mind, not the body.  A thinking, questioning person can never be a slave, no matter the physical circumstances one may find themselves in.  He/she understands the game and whether it be overt or covert, chooses not to play it.
Posted by dsasR at 10:04 AM