Sings ~ The Pain in Spain is Giving us a Migraine 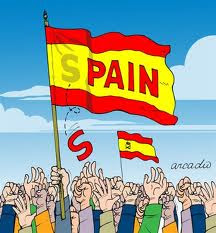 On Friday, IMF head Christine Lagarde was quite pleased with herself.   We know this because when on the Charlie Rose Show on Friday night, she pretty much said so.

She was able to manipulate, bully cajole and arm twist nations into coming up with $430 billion in funds to act as a buffer zone for the EU.  Of course she originally stated she would settle for no less than $500b but you know if you read the previous posting how everyone in politics, finance and media are liars.

According to the Telegraph UK, "“We made a call to action, and our members delivered,” proclaimed Lagarde. Behind the rhetoric, though, donor countries are seething — not least those who aren’t even in the euro. Switzerland, the UK, South Korea and Sweden have respectively stumped up $26bn, $15bn, $15bn and $10bn. Norway has weighed in with $9bn, Australia and Singapore pledging $7bn and $4bn each. "

So the IMF war chest now stands at $800b

What is the US contributing?    Zero 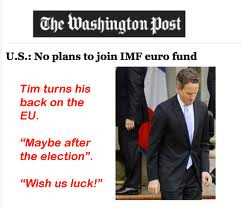 If the US was to pay its proper share, US taxpayers would be shelling out $70 billion to Europe. Everyone on both sides of the ocean knows if the US agreed to contribute one penny to directly aid and assist Europe, there'd be such a stink, President Obama could for all intent & purposes kiss his coveted re-election 'bye-bye'.

In fact, an interesting little news tidbit came out on Saturday:  Much of the $430bn global bail-out fund agreed in Washington over the weekend may not be available until next year.

"Britain pledged an extra £10bn ($15bn) to the International Monetary Fund but Treasury officials stressed the contribution is contingent on the US ratifying an agreement struck two years ago in Seoul. The US, though, is not expected to sign it off until after November’s presidential election at the earliest... other countries have attached similar conditions to their contributions" (Telegraph UK)

So in other words, everyone was in such a huff-huff rush to secure IMF funding yet attached conditions that don't free up the funding until late 2012 at the earliest..

But the markets are stupid creatures and they will probably still react to the IMF news with positivity come Monday's opening bell.

This last paragraph from the Telegraph article makes for a good segue way..

"Spain is at the epicentre of the latest concerns with fresh fears about the state of its banking system. Spanish officials revealed over the weekend that they are considering plans to take toxic assets off banks’ balance sheets." 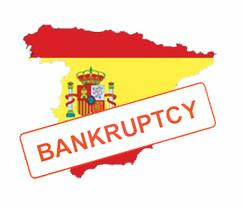 All that IMF money.. that's meant to protect the rest of Europe and really by extension the global community from feeling the affects of a Spanish collapse.

A mere drop in the bucket.

We had thought Greece would take down the EU and cause financial pain for banks around the world.  We stand corrected.. more and more it appears Spain will be the nation to pull the global economies down into official depression.  Its simply too large a nation to be bailed out.

Spain is in horrific economic shape.  To give just a sampling of how bad things are, we visited the English version of their Madrid newspaper, 'El Pais'.  These are all headlines/articles from the last couple days:

Government plans 50-percent hike in students' university fees -- "Spaniards pay between 900 to 1,000 euros a year in university fees, some 15 percent of the 6,000-euro average annual cost of a student’s education. Under the plan, student fees could jump to a maximum of 1,500 euros next September. " 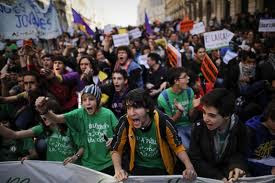 Stock market drops below psychological 7,000-point mark -- "With Spain now at the forefront of the euro-zone crisis, the Spanish stock market on Thursday plunged to close to its lowest level since the start of the global financial crisis in 2008, led by the banking sector"

Iberia strikes blow to pilots with 20-percent wage slash -- "Spanish airline Iberia is to slash its pilots’ salaries by 20 percent as part of a series of measures to reduce its costs and increase productivity by 25 percent."

Economic crisis sees large numbers of Latin Americans heading home -- "the number of foreigners in the country has fallen for the first time: there are 40,447 fewer than in 2010. Spain’s immigrant population now stands at 12.1 percent of the population, a tenth of a percentage point less than in 2010... It appears the economic crisis is the underlying cause of these changes to the demography of Spain"

Spain's unemployment is over 24%.  The number of young people out of work is over 50%.   Recently, the King of Spain Juan Carlos went on TV to apologize to his people.   Why?  Oh nothing much.. He merely returned from an elephant hunt in Africa that cost nearly $60,000, or more than twice the average salary in Spain. 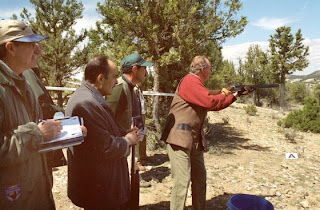 They just don't get it..  They really don't.

But then again why should they be expected to?

They have gotten away with not having to bear any brunt of the financial pain and with very few expectations, the populaces around the world do not stand up to force them to swallow their fair dosage of bitter castor oil.

Most media will report fairytales and fables to you..

People seem to need that.

We report the truth.  And when people are ready for reality, we'll be here to inform, and if need be, with a heaping plate of vanilla-creme cookies and a steaming cup of marshmallowy hot cocoa. 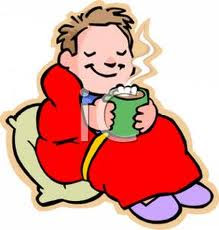