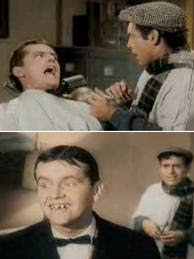 Well Tuesday's Dow finished at a positive.. up 75 pts or thereabouts..

Guess all that doom and gloom in the mainstream financial press on Monday suddenly disappeared like rain clouds in the sky and its economic smooth sailing ahead.

Of course no thinking person believes that.  They know the deal.

So what would be the proper way for global stock markets to behave so that everyday people could truly look at the indices as the True, accurate barometer of the economy?

Simple-- it would react like a dying nerve of a tooth.

When a nerve dies in a tooth it doesn't magically fix itself, or come back two weeks later to briefly annoy you.  Its sudden.. the pain builds in intensity and the throbbing eventually becomes constant.  And you can pain medications or put Ambusol on the tooth to give some comfort, but as those who've ever suffered with a dying nerve can attest, its not simply going away.

The tooth will get the treatment it Demands-- root canal or an extraction.   Then and only then will the pain cease.

Now if the stock market accurately reflected the True economy,  and investors were sincerely upset over the state of Europe as they pretend,  the 100 or so point drop on Monday should have been followed by another 100 pt drop today.. followed by more loss tomorrow..and next day.. till it got So Bad that the powers that be which manipulate the system to their benefit were forced to take emergency action and "fix" the problem.

That's not how the stock market works.  Its about profit.. Gotta keep buying.. keep investing..  when market goes up, keep putting $$ into it.. and when it drops, now its a perfect time to 'buy into the dip' as the morons on CNBC love to tell their audience.

The global economy is much like a dying nerve.  Its getting worse and worse.. It's not going away and its not improving.  How could it?  No problem, big or small ever goes way simply by wishing, hoping or sending out positive vibes.  No different than dealing with a dying nerve. 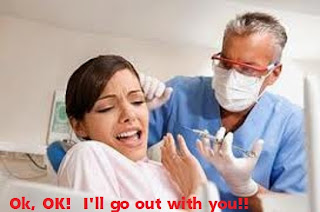 And no problem can be fixed when no leader of any Western industrialized nation has the courage or will to address it; to essentially tell the culprits i.e. banks and investors to go Fuck themselves, and re-institute policy to stimulate their economies instead of siphoning and sucking their wealth out via austerity.

And like a dentist, government leaders would need to perform a financial 'root canal' by gutting out the financial system of its cavernous decay and rot, such as breaking up the major banks and financial institutions into smaller 'baby' banks, much like Ma Bell was broken up in the 1980s into smaller 'bells' that we know today as Sprint, and AT&T among others.

Or there would be extraction, not of banks necessarily but of those individuals who ran those banks to the ground and/or committed criminal fraud.  People like Lloyd Blankfein of Goldman Sachs and Ken Lay of Bank of America would be "extracted" from their positions of power and influence and transported via squad car to jails or detention centers in places like Guantanamo as they await trial for committing economic terrorism.

This is why the stock market is so fake and ultimately unimportant in the lives of most people.  Its also why if it crashed tomorrow, you'd feel less of an effect or alteration of your daily life than you realize.

You're simply conditioned to think of Wall St as important.  And seeing the levels of corruption and greed permeating the stock market, it is actually more patriotic to root for a major crash & correction than to hope for a continuation of business as usual.

We're going to conclude with an example, one of many we've provided over the length of our existence 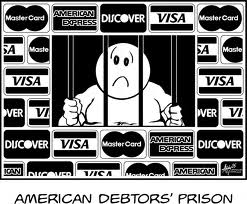 As we all know by now, not one single person of any importance has been so much as arrested for the 2008 economic collapse.  Bernie Madoff?  He was a peon; a nobody.  No one of true status, priviledge and/or power has had their lives disrupted in any way.

Now let's say you owe a debt collector $280- what happens then?  Believe it or not, in some states you can be hauled to jail...

"Although the U.S. abolished debtors' prisons in the 1830s, more than a third of U.S. states allow the police to haul people in who don't pay all manner of debts, from bills for health care services to credit card and auto loans. In parts of Illinois, debt collectors commonly use publicly funded courts, sheriff's deputies, and country jails to pressure people who owe even small amounts to pay up...

Under the law, debtors aren't arrested for nonpayment, but rather for failing to respond to court hearings, pay legal fines, or otherwise showing "contempt of court" in connection with a creditor lawsuit..."

~ This is what is called in the business, a 'legal loophole'- get it? 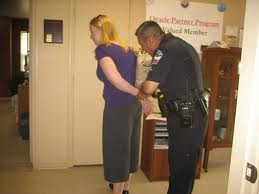 "Illinois isn't the only state where residents get locked up for owing money. A 2010 report by the American Civil Liberties Union that focused on only five states -- Georgia, Louisiana, Michigan, Ohio, and Washington -- found that people were being jailed at increasingly alarming rates over legal debts. Cases ranged from a woman who was arrested four separate times for failing to pay $251 in fines and court costs related to a fourth-degree misdemeanor conviction, to a mentally ill juvenile jailed by a judge over a previous conviction for stealing school supplies...

~ This is what happens when counties are strapped for cash...

"Some states also apply "poverty penalties," including late fees, payment plan fees, and interest when people are unable to pay all their debts at once, according to a report by the New York University's Brennan Center for Justice. Alabama charges a 30 percent collection fee, for instance, while Florida allows private debt collectors to add a 40 percent surcharge on the original debt. Some Florida counties also use so-called collection courts, where debtors can be jailed but have no right to a public defender."

Like we've said before.. two Americas.  And if you are part of the 99%, you should Never EVER be rooting for the economic flourishing of the top 1%.  You should be hoping and praying the market crashes- its probably the only chance you have to be noticed and addressed by the elite...

Assuming they fear you...

Only squeaking wheels get the grease. 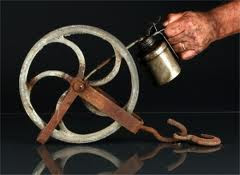