Regurgitation is always nasty, especially when AP does it 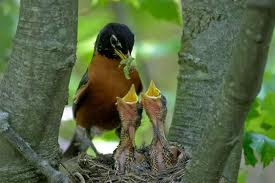 Since today is much like yesterday news-wise, we at A&G will focus not on a specific story but go behind the scenes to understand why and how most people in this golden media age are so ill-informed and how are news stories actually compiled.

So how is news formulated?   We like to picture roving reporters doing due diligence; looking under every figurative 'rock' to uncover the Truth which will rattle the system and restore democracy a la Woodward & Bernstein in "All The President's Men" as they pieced together the Watergate cover-up.

Perhaps that's a bit too naive.  Because that form of news gathering is the extreme exception, not the rule.  Most of the news you see on TV or read on the Internet or newspaper is regurgitation.

We could use many examples but for some reason this one in particular annoyed the hell out of us more than most...

The other day President Obama appeared on the TV show "The View".

Can't blame him.  Always nice to field softball questions during an election. 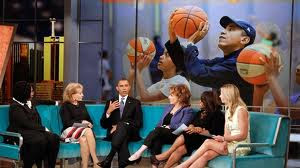 ~ President Obama speaks on how to shoot a basketball left-handed

But here's the thing- how do we know this when we're not ones to be watching TV at 11am est?    Well, AP News decided to have one of their writers compose an article on it entitled "Obama Talks Gay Marriage, Politics and Pop Culture on 'The View'"

Now for purposes of this posting, we're not concerned what the President's political stances are, his expressions of thought or even how the five cackling geese-women reacted.  The focus here is on what is 'news' and how it is gathered.

So how was the information in this article compiled?  Did the writer go to the taping of the program and observe the interaction firsthand?  Did she sit and speak with the President before or after the segment?  Did she contact the White House or anyone else for any followup?

The writer pretty much spent her morning either sitting in her office spinning round n' round in her chair or at home sipping coffee while in her jammies and bunny slippers.  Then when 'The View' came on, she DVR'd the program while watching, and after much rewinding and fast-forwarding, composed an article complete with full quotes,calling it 'news'. 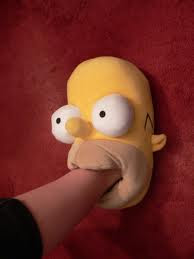 And either it was her brilliant idea to write 1000 words on a puff-fluff interview by five ditzes or it was her editor..  Whoever thought it up, congratulations for bringing high school quality newspaper journalism into mainstream news.
Some examples in the article...

"When asked by ABC's Barbara Walters whether he would fight federal laws that limit the rights of gay and lesbian couples, the president noted, "we don't think the Defense of Marriage Act is constitutional." "

Regurgitation with no explanation of what the 'DMA' is, what it entails or any outside source to back up or refute the President's opinion.

"In addition to talking policy and politics, the president also shared personal details about life inside 1600 Pennsylvania Avenue, including the fallout from his infamous, impromptu Apollo performance. Obama said that first lady Michelle Obama "gets jealous when I sing too much.""


So let's stop here a moment.  Why does this matter?

Anything that AP or Reuters writes on any topic is ultimately printed in thousands of newspapers nationally and worldwide, as well as mentioned on thousands of nightly newscasts. 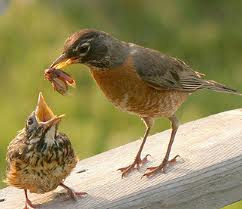 Because newspapers and TV stations are too Cheap to hire journalists, they instead pay centralized news gathering sources yearly fees to be allowed to access whatever stories needed to fill space between the commercials or print ads.

If you still subscribe to the newspaper, try this experiment:  Look through your Section A and count how many articles come from AP, Reuters or the New York Times?   You will find the only exception of non- news feeder information is local stories about budget cuts or cats stuck in trees.

Now as we said before, the woman who wrote the article on Obama actually wrote around 1000 words on this topic. Most of it is filler but that's intentional.

This expanded article allows newspaper editors the freedom to edit down the information to fit whatever spacing is open between advertisements, of if local news is concerned with 15 seconds of dead air, a portion of this article can be read by a perfect-looking person off a teleprompter.

The media love this form of information collecting-- its cheap and allows them greatest flexibility to determine how much or little of a news story will be covered, or if covered at all. 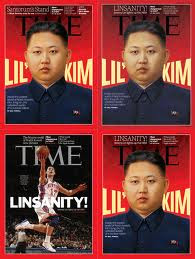 ~ Guess which version hit US Newsstands?

Often you will see this type of shoddy journalism in the Sports section of a newspaper.  Perhaps a paper can not afford to send its reporter to cover the local baseball team when it plays on the opposite coast, so instead the writer watches the game on TV, regurgitates what he/she sees, and then maybe scours the Internet post game to locate a quote or two.

This is why newspapers are dying.  They provide no information that one could not find on their own via Yahoo or Google News.  The only thing they offer are Sunday coupons and Sudoku.

And admittedly the Worst part of all this where A&G is concerned?  This person got paid a good salary to do that!

Hmmm.. maybe we should try that.. wonder how it would read: 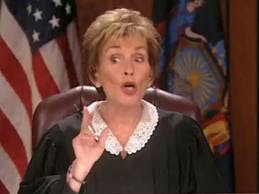 Judge Judy lays down the law -- "Judge Judy Sheindlin had no time this afternoon at 3pm on UHF channel 17 for a woman who claimed an engagement ring given to her by her ex-bf was a gift and not legally bound to return it.

"Judge Judy interrupted the flustered defendant numerous times and at one point delivered her classic line, "Don't pee on my shoe and tell me it is raining, Missy"...

"Eventually the perturbed Judge rendered her verdict that an engagement ring does not legally fall under the umbrella of 'gift' because it is a promise of a specific thing; a future marriage, and by law, if a marriage does not take place, the ring must be returned."

Now where's OUR Fucking check?
Posted by dsasR at 12:41 PM