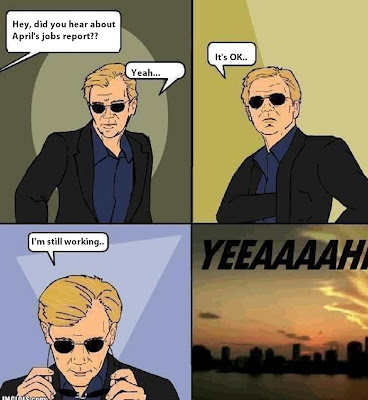 Don't really want to spend too much time writing on this.. its Friday- the sun is shining outside and lovely weekend awaits.. etc etc..

The "experts" predicted job gains of 165k, which if they were correct, would have been anemic since 225k jobs a month have to be created to keep up with population and new workers seeking to enter the marketplace.

In a way we at A&G are happy because had the jobs numbers been under 100k, it would have given the Fed the perfect excuse and political cover for QE3. That the last thing anyone wants unless you're a bloodsucking investor or bank.

Maybe it will bounce back.. maybe it won't.. don't matter.

Unemployment actually dropped to 8.1%.  That should help Team Obama.

Of course as long as no one mentions or understands that in just April alone, according to Rick Santelli at CNBC, 522k adults stopped looking for work.

To be clear, 522,000 people who were unemployed and actively seeking to be hired, got so discouraged over time that by April, they simply stopped.  And this doesn't count those who gave up in March.. or February..

And due to skillful stat fudging, you come up with 8.1%. 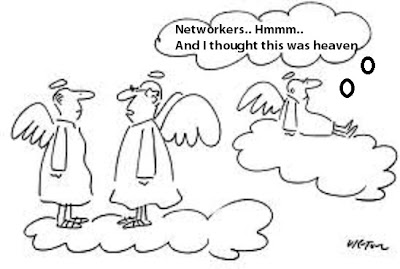 The true unemployment rate is between 11.5%-14.5% depending on which charts, graphs or algorithms you use.   Let's just all agree, whatever the number is, that its not 8.1%.

Santelli also stated that 41.3% of the total unemployed have been out of work for 39 or more weeks...

That's 9 months- enough time for a baby; from impregnation to delivery.

In Europe, they're losing jobs;  not seeing any real creation.

Sorry about that... So here's your positive--  this Sunday, May 6th there will be elections in France and Greece and as its looking now, this could be the beginning of the tide turning when it comes to the austerity-crazed push you all are experiencing.

So that's something hopeful to take with you into the weekend.
Posted by dsasR at 11:42 AM