Celebration: Pita Bread & Bordeaux for everyone~ 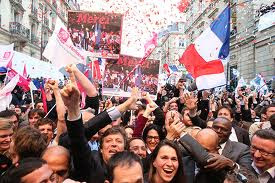 Well yesterday was a good day..

There were elections in many European nations yesterday-- some minor like in Germany to determine the political make up of the Reichstag; others more important like leadership of France & Greece.

In summary, the anti-austerity forces won the day in a rout.  The corporate media was none to happy to have to report it either.  The only word they hate and distort in meaning more than 'Socialist' is "Populist" and God knows how the elite hates the idea of the will and needs of people influencing policy.

Now if this was a movie, we'd call yesterday a Great day, make it the final scene of the film depicting good triumphing over evil, then have two good-looking people kissing on a sunny beach for titillation while some rip-roaring adrenaline-inducing music played during closing credits.

But life isn't like that- there's always a day after.

And just because the bankers and Germany's Merkel saw the population of Europe basically middle-finger them on Sunday, doesn't mean they are going to care, nor stop their insidious plans to transport massive amounts of wealth from the populaces to their coffers. 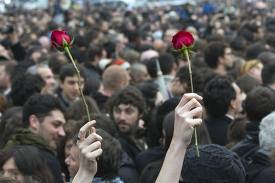 As a quick aside, do you ever notice that the very wealthy just hate income redistribution when it requires them paying more taxes and contributing to their national economy, and yet don't really have much of a problem when the redistribution is altered to their direction?

Kinda funny how that works, huh?

So what's happened in the markets?

Let's see.. Asian stocks dropped collectively over 2%.  Good.   And Europe.. Hmm, kind of a hodgepodge- England is down, Germany is up..  And the US..  its down but a very insignificant number.

Then again, we tend to think of the rest of world as politically insignificant and as our shoddy school system can attest, most can't locate France or Greece on a map, so...

And let's be frank-- outer space aliens could come and decimate 50% of the USA, and the market would soar to 30,000 because of all the investment generated from rebuilding.  That's just how monsters think... 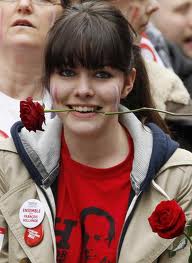 Seems now the EU’s fiscal task-force is taking up permanent residence.  News broke in Athens this morning to the effect that the European Commission’s Greek fiscal task force, under the leadership of Horst Reichenbach, is to make its set-up in Athens permanent and expanded its size from 10 to 40 thugs in business suits responsible to ensuring every penny of wealth is sucked out of Greece.

The bankers and mainstream media would put it differently.. they might say something like, 'Reichenbach’s team size is to be quadrupled from 10 to 40 officials and responsible for monitoring the implementation of reforms that Greece has pledged to its Troika creditors.'

Also the mood on Wall St is they do not fear France's new leader Hollande- not in the least.

Here's the viewpoint of an economist at the Peterson Institute for International Economics which pretty much sums up how the bankers see Sunday's election:  "The rumors of an imminent split (between France and Germany) are vastly overblown... When Hollande makes a big statement about wanting to change the political direction of Europe on the issue of austerity, he's quite frankly bluffing. He's in no position to do so." 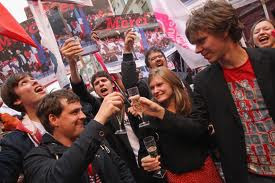 See the French bond markets are manipulated to set to explode by summertime as the full force of Europe’s contraction crisis hits France.  To economists and investors, it really doesn't matter who won yesterday because they're confident they will get the policy decisions they want.

From Telegraph UK: “They absolutely must cut public spending and control the debt,” said Marc Touati from Global Equities in Paris. “It will soon be clear that we are in deep recession. If they don’t act fast, interest rates will shoot up and we will have a catastrophe by September,” he said."

See how it works?  Stop austerity and watch France plunge into depression and watch your bond rating go bye-bye.  Or do as you're told-- keep cutting public spending and sardonically, no one gets 'hurt'..

No matter what a new leader promises; what hopes and promises he brings for a fresh new start, the world of finance always makes sure to trap them in seaweed & kelp and tug that leader to the bottom of the ocean with his predecessors.

We do know the markets are nervous once again over Greece though in the media they're doing everything possible to keep up a positive front with explanations that coalitions will need to be formed, compromises made and if at all else fails, the government will run out of money by June so it will be forced to accept more cuts to meet operating expenses.

Here's the simplest way to understand the mindset of banksters and creditors-  You are married-- your spouse racked up a lot of debt.  Interest has been compounded..  Debt now unmanageable.  Your spouse passes away from the stress and strain--  Does that end it?  Nope.. Then the creditors go after you nonstop... you're health takes a toll and now you're in the grave too..

Does that end it?  Nope.. Now the next of kin are affected because there will be no inheritance left when they are done.  They will simply not stop.. 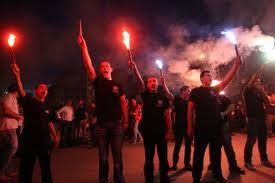 ~  The Greeks were happy as well

As disturbing as it is to think or write about, the only real chance to hurt the bankers and cause them the financial pain they've delayed for four years at the expense of the populaces of the world, come from the extreme left and right elements which won seats in the Greek parliament.  Because it will be they who are the most hard line to austerity, and far less likely to back down than moderate political parties.

Both the extreme left and right in Greece want the nation to leave the EU and overall it would be better for their nation to do so.   In this aim, both parties are correct.  The big question is whether the larger, mass-appealing parties in Greece eventually take up that view, or if its like in the US-- political parties different in name and animal mascot only.

So in summary, we should look at yesterday as a very good day but not celebrate too much-  there's far too much uncertainty about how strong a leader Hollande will be and how deep his conviction is.   And too much uncertainty over Greece- they've been known time and time again to work with their captors under the gypsy-like guise that they can simply trick them later.

The only certainty in this whole rotten game is that Europe.. well really the entire globe.. is racked with Cancer who dress nice, speak soft and know how to grease Politicians' palms.

And they possess a singular mindset that never alters, no matter how polite the conversation or civil the negotiations-- in layperson terms, it would sound like this: 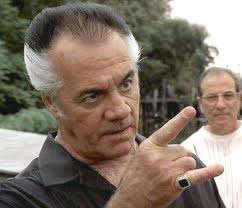