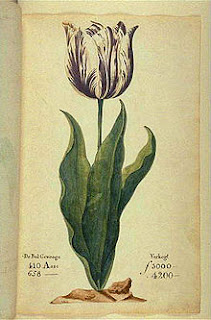 Long before speculators clung their greedy little tentacles around stocks, bonds, currencies and commodities like gold, silver and crude oil, many centuries ago they sought out profits and instant fortune from a most beautiful flower..  The tulip.

And this is the story:

The introduction of the tulip to Europe is generally attributed to Turkey; specifically Ogier de Busbecq, who was the ambassador of Ferdinand I, Holy Roman Emperor to the Sultan of Turkey.  He sent the first tulip bulbs and seeds to Vienna in 1554 from the Ottoman Empire, which were soon distributed to Holland by around 1593.

Once tulip bulbs were planted that could tolerate the harsher conditions of the that part the Netherlands, the flower grew quickly in popularity. What made the tulip so unique and special to Europe was that it possesses a saturated, intense petal color that no other plant exhibits.

Prior to its independence, Holland was known as 'the Spanish Netherlands', but by the late 1500's, the nation was seeking to embark on its own economic course and the flower became a status symbol of the newly independent country's trade fortunes.   As a result, the flower rapidly became a coveted luxury item.

So what caused the speculation craze in the tulip?

The flower itself a conspirator in the supply-squeeze that fueled the speculation.  The tulip is grown from a bulb and that cannot be produced quickly. Normally it takes 7-12 years to grow a flowering bulb from seed.

Without getting too technical on the horticulture side, when a tulip exhibits multi-colors, the effect is due to the bulbs being infected with a type of tulip-specific mosaic virus, known as the "Tulip breaking virus", so called because it "breaks" the plant's lock on a single color of petal" 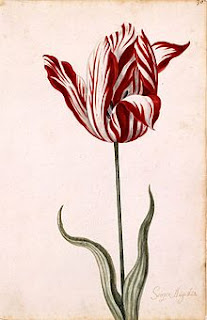 In time, people started desiring "broken" tulips and those with the "breaking pattern" became quite sought-after in demand since they can only be obtained through offsets, not seeds, as it is only the bulb that is affected by the mosaic virus.

You see, tulips bloom in April and May for only about a week. During the plant's dormant phase from June to September, bulbs can be uprooted and moved about, so actual purchases market occurred during these months. During the rest of the year, florists, or tulip traders, signed contracts before a notary to purchase tulips at the end of the season (effectively futures contracts).

And from this, the Dutch developed many of the techniques of modern finance, and created a market for durable tulip bulbs.

At first tulips were sold at standardized prices.  As the flowers grew in popularity, professional growers paid higher and higher prices for bulbs with the virus, and prices rose steadily. By 1634, in part as a result of demand from the French, speculators began to enter the market and prices rapidly increased year after year.

Soon any tulip bulb could soon fetch hundreds of guilders. In 1636 the Dutch created a type of formal futures markets where contracts to buy bulbs at the end of the season were bought and sold. Traders met in "colleges" at taverns and other get-together locations.  The Dutch derogatorily described tulip contract trading as windhandel [literally "wind trade"], because no bulbs were actually changing hands.

The entire business was accomplished on the margins of Dutch economic life, not in the Exchange itself.  Even everyday people got involved as a means to supplement their incomes or dream of a quick rise to wealth. 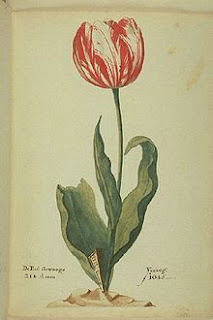 Tulip mania reached its peak during the winter of 1636-37, when some bulbs were reportedly changing hands ten times in a day. No deliveries were ever made to fulfill any of these contracts because in February 1637, tulip bulb contract prices collapsed abruptly and the trade of tulips ground to a halt.

The collapse began in Haarlem (its spelt correctly-- two a's), when, for the first time, buyers apparenty refused to show up at a routine bulb auction. Only sellers existed, as there were no buyers, at all.  Haarlem was then at the height of an outbreak of bubonic plague, so this may have been the reason why.  Nonetheless, within days panic had spread across the country.

Despite the efforts of traders to prop up demand, the market for tulips evaporated. Flowers that had commanded 5,000 guilders a few weeks before now fetched one-hundredth that amount.

Many historians over the last few centuries have tried to understand what happened, and end up debunking each other.

We at A&G aren't so much concerned with that, but rather to show the similarities between Holland of the early 17th century, and today;  how greed and irrationality pushes up the value of an item that in itself should have either minimal or no value whatsoever.  And the desire to speculate and profit in the 'Now' supersedes any pretense of logic or concern about the future.

It is this mindset which causes gold to skyrocket, which is really no more than a panic buy based on a belief (right or wrong) that fiat currencies like the dollar and euro will be one day worthless.

It is this mindset that pushes oil to over $100/barrel on the trading floor even though statistically-speaking, consumption has decreased vs a year ago i.e. people driving less, etc..

It is this mindset which contributes heavily to a rising Dow even though there's been little to no sincerely good economic news to boost spirits.  Investors and traders simply can't let reality get in the way of expanding their profits. 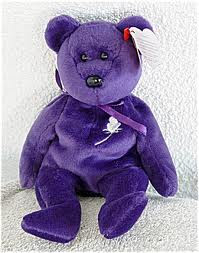 It is this mindset which took an adorable toy for children called 'Beanie Babies' in the 1990's and pushed up the plush animals from the original $5 price to hundreds if not thousands of dollars per item on eBay based on "retirement" of the style and how pristine the tag was.

Remember folks:  markets are guided by two principle forces-- greed and fear.  This is why when they go up, they usually do so quickly, like an inflating bubble.  "Gotta get in the game.. Gotta Gotta.."

And when people seek to sell, its a madhouse rush to the exits, and the bubble quickly deflates. "Oh god..Oh god.. Gotta sell.. Gotta sell!"