Anniversary of a Bridge some love trying to "sell" 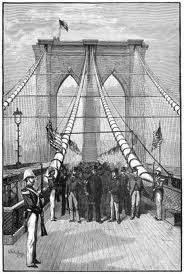 One of the biggest reasons why most of what one may read in news is nothing more than empty filler not worthy to look at, is because quite honestly, news-worthy events do not occur daily.  There's simply nothing important to write about.

This is actually a good thing because news-worthy events are often bad, and the human psyche wouldn't be able to take a non-stop barrage of 'bad'.

Yet there's deadlines to file... space between the ads to fill, etc and money to be made..   A&G is not like that-- we write what we wish; Interesting things like this...

There's a popular expression one may make when encountering another who appears to be un utter sucker and easily duped (like most who play the stock market) and it goes like this:

"Well if you believe That, I have a Bridge I'd like to sell you!"

Today's history milestone made us think of it.  After 14 years and 27 deaths while being constructed, the Brooklyn Bridge over the East River opened on this day in history, May 24, 1883.

Thousands of residents of Brooklyn and Manhattan Island turned out that day to witness the dedication ceremony.  Designed by John A. Roebling, the Brooklyn Bridge was the largest suspension bridge ever built to that date. 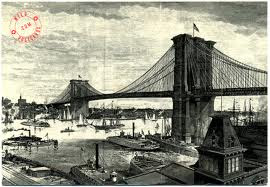 With its unprecedented length and two stately towers, the Bridge was dubbed the "eighth wonder of the world." The connection it provided between the massive population centers of Brooklyn and Manhattan changed the course of New York City forever. In 1898, the city of Brooklyn formally merged with New York City, Staten Island, and a few farm towns, forming Greater New York.

Ironically, a week later on May 30th, a rumor that the Bridge was going to collapse caused the needless deaths of twelve people who were trampled amid the irrational chaos.

Just thinking-- not much different really from the constant rumors that financiers and governments put out to stimulate investing and manipulate market 'bull runs'.  People get crushed but just not literally-- only their life savings.

It also makes one think-- when's the last time we as a nation have built something so great and more importantly Functional?

Certainly some would argue the new twin towers being erected will be great once construction is completed; as great as the previous towers were.  And this may be true from an architectural standpoint.  But we speak of Functionality too, not buildings that amounted for decades as nothing more than grandiose office space for Wall St firms. 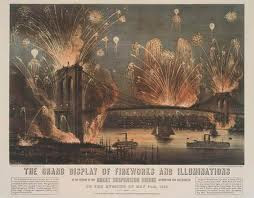 The Brooklyn Bridge was different.. Special then & special today...

1883 was such a different time to live.   Obviously, over time we experience technological advancements and clothing/hair styles change.  But economically, it was such a vibrant time.  Factories were bustling-- creating everything from textiles to machinery.  The hope of economic prosperity was so great that millions upon millions flocked to US shores, especially from southern and eastern Europe.

Unlike today, you actually had purchasing power back then.

A newspaper was four cents and in your local Sears catalog, you could buy a headstone starting at $10 and a build-it-yourself home for $823. 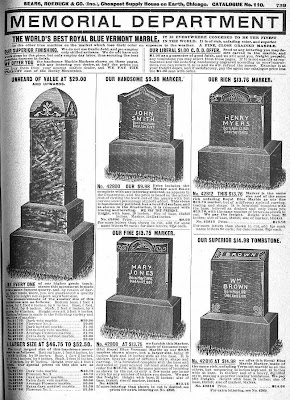