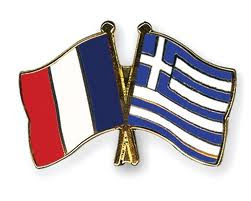 Its now the day 2 since elections in France and Greece and it gives us a little more time at A&G to provide further analysis that is both insightful and provides clarity.

We are still pleased that Hollande defeated Sarkozy but do not see the man as a savior or a true leader; someone who will shake up the system and re-assert French identity in European and global affairs.

He says he wants to work with Obama and promises he won't be "difficult".. Ugghh..  Does the world really need another lackey?  Is that why millions elected him over "the ferret"?

Even if Hollande wanted to stir things up, we see the evil financial system so deeply entrenched, he will have barely any moving space, especially with the pressures by Germany, Britain and other extreme-austerity-ites to fall into line.

He may have the support of the people but like pretty much all politicians, they cower and tremble to the will of the stock market.  Would love to think he's different but we're realists-- so we'll see.  Wall St doesn't seem to be scared of Hollande, stated it openly yesterday and that really says it all. 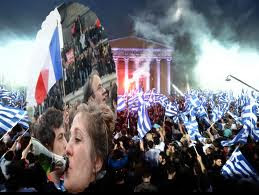 We're happy to see Greece is back in play-- After all the utter selling-out of the nation by the corrupt, treasonous politicians who were in power over the past few years, the Greek populace (those who were not wealthy and connected enough to flee the country) voted out most of the filth.

Fortunately, no political party won enough seats in their Parliament to claim a majority or mandate, and thus far the leading voter-getter party had to concede it could not establish a coalition which means the 2nd place party tries.

If they fail, then new elections are held in June with outcomes even more uncertain and unstable than currently.

Once again, we say 'Good!'.  If there's one thing markets and investors hate more than populism, its uncertainty.  They are akin to a better who will not place wages on a football game unless assured of the outcome beforehand.

Yesterday the markets pretty much yawned at Sunday's results.

From Reuters:  "Greece sank even deeper into crisis on Tuesday when a centrist conservative party said leftist candidate for prime minister Alexis Tsipras would drive the country out of the euro with his proposal to reject an international bailout."

Well good for him!


The majority party in Greece couldn't go along with this sensible solution to save its sovereign 'soul' since like all political establishment around the world, they are so deeply entrenched in the System and the financial elites which allow their parties to survive.

So you have as Reuters puts it.. 'crisis' 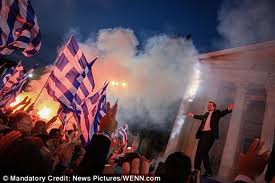 We do find the word choice to be comical however since Greece has been full crisis mode for the last 12-24 months.  The people have taken out billions of euros from their banks in monthly 'runs' out of fear... The previous government raided private accounts of universities and hospitals meaning even more cut backs..  Their minimum wage which was the equivalent of $4 US has been cut.. Crime is dramatically up-- robberies, rapes, etc..

Four years ago, Greece owed its creditors 300billion Euros.  Today, its 3x that figure because instead of allowing the nation to default and leave the euro, they were forced to take on even more debt with higher compounded interest.

We won't go anymore into the intricacies of the Greek political standoff going on.  Too many twists and turns, like a soap opera and just as unsatisfying. 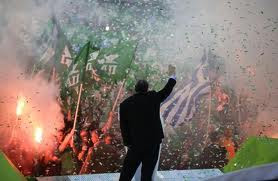 But to coin the phrase of a President we all know and.. well not 'love'..

When it comes to Greece, the deep uncertainty and market jitters, albeit tempered, we at A&G once again have Hope...

Hope that Greece will leave the EU and save itself

Hope that this triggers the end of the European Union

Hope that this also triggers a global backlash on austerity

Hope that politicians around the world are provoked or scared into action to start really addressing the problems of the global economy and focus its wrath, fury and retribution on the perpetrators.. the financial sector.
Posted by dsasR at 11:55 AM