Why a rising stock market is bad for you 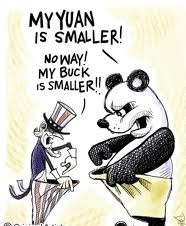 We wrote on this before but will write on it again... Here's the simplest and most accurate way to follow and understand the stock market as it relates to your day to day life:

When the dollar's value goes up, the market & oil go down.

When the dollar's value goes down, the market & oil go up.

It's really that Simple.

The reason is clear:  Everyone in power-- the Federal Reserve, the US Treasury and Corporations want the dollar as weak as humanly possible.  Why?   In the case of the Treasury, it allows the US to pay less on its foreign debts and a stronger dollar would mean after currency transfer, we'd be paying a higher value on our debts to China.  For the Fed, it means more money circulated into the system, especially the stock market which helps the Dow artificially inflate and helps draw in mom & pop investors to speculate their life savings.  And as for corporations?  Well most of their profits come from abroad since the US consumer is pretty much completely tapped out, so the weaker the dollar, the cheaper to export goods and larger the profit margin from foreign consumer markets.

Doesn't a weak dollar hurt the US consumer?  Of course it does.   It means everything one buys cost more.  Its not necessarily that the goods and services increased in price like it would with normal inflation. It means more dollar bills are needed to cover the value of those purchased items. 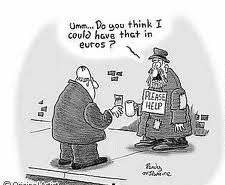 Think of it this way:  Let us say a $1 coin weighs 1 oz, and normally a loaf of bread is $3 or 3 coins which equals 3 oz in weight.    Now let us say the government devalued the coins and produced a new batch which now weighs 1/2 oz but still says $1 on the front.  The imprint may still say $1 but due to the devaluation, the price of bread went up to $6 for the loaf.  Why?  Because the bread required 3oz of coin to be sold.  When the government devalued the original coin's weight from 1oz to 1/2 oz, it meant 6 coins instead of 3 were needed to provide the value to buy the bread.

This is what the US Treasury and honestly, every nation around the world is doing-- a global competition to see how can devalue their currency the quickest.  Last month for instance, the Swiss Franc was SO strong in value, that due to intense pressure from Nestle and other Swiss corporations, the government decided to peg is value to the Euro, which is a much, much weaker currency so those corps could rein in greater profits.

Back to the main point:  For an everyday person, it is actually better for them if the market drops.  It means the price of oil is dropping (the price of gas to put in your car decreases) and your dollar gives you greater purchasing power. This holds true for stock markets of every nation in the world.

So the next time the market goes up or down, look to see how oil and the dollar did, and you're see a consistent pattern.  And perhaps you begin cheering and rooting for a market that declines.
Posted by dsasR at 1:01 AM