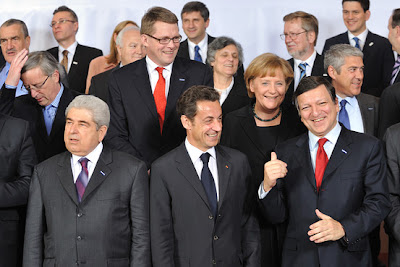 You will hear and read many reasons why the market has dramatically spiked today.  Among them that the leaders of Europe have agreed "to boost the region's bailout fund and struck a deal with banks and insurers to accept 50 percent losses on Greek bonds." (Reuters)

This is by the way, a collective sell out their populaces once again to the tune of the creation of a One Trillion Euro backstop to help prop up banks and cover investor risks in the future. Amazing isn't it- All political leaders of all political party persuasions are All deeply shortsighted and evil.  Just 'pass the buck' and hope things don't fully explode (or implode) on their watch.

There must be a political gene that makes all leaders of all nations sociopathic, egotistical and self-serving.   Maybe that's why they have such a connection with Investors and go out of their way to treat them like royalty.

The real reason markets are climbing are these 3 headlines, all from Reuters:

2  Dollar falls to fresh record low against the yen


I am a bit of a repetitive parrot on this point because its important to understand and remember--  the stronger the market, the weaker the US dollar.  The weaker the US dollar, the more it cost Americans to buy Everything (oil is up an additional $3.92 per barrel today-- guess who pays at pump? Point-point) while benefiting soulless corporations who can acquire greater profits abroad from cheaper exports.  It also means the US government doesn't have to pay back as much debt to China because the currency is weaker. 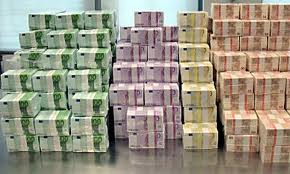 And lastly, Investors are cockroaches- they only care of profit, not you the everyday person, so when the market rises, it is Absolutely NO reflection of the greater US economy.  It only means profit was to be found, like leftover sweets in a trashcan to be devoured.  Treasonous snake Fed Chair Ben Bernanke has been successful in his multi-Trillion dollar efforts to kick start the market while destroying savers and ability of people to generate capital through non-speculative means.

What makes the European deal disgusting is the same themes that made the 2008 US bailouts disgusting (and which pompous fuck politicians act like they saved the world):  The Banks get bailed out, money gets sucked out of National treasuries to cover others, resulting in higher taxes, lower wages, weakening pensions and reduction of social services.

And Nothing was solved.  The 'can' simply was kicked some more.

But no one can be surprised.  Politicians and governments are good at this: coming up with magical solutions out of thin air which simply buy them time and breathing room.  It would be comical if not that these self-centered decisions have ramifications for generations.

But that's how it works- enact policy with total self-interest in mind and convince just enough people its for their own good, so that they can go back to watching football and other tripe, and a populace is soothed that otherwise without the mindless distractions, would be charging their leaders' domiciles with pitchforks and hangman nooses.

One thing here at A&G, we don't pretend to be neutral and insult the reader's intelligence.  We here are all angry... and Tired!  Tired of these same games being played for Three years now.  Banks Must be Saved.  Markets Must be Strengthened.  Investors must be placated.  And Damn all the peoples of the world who pay for it!

The world keeps getting worse and the bad people keep winning.

The righteous side- We are due a victory. Have faith-- it will come.