I see you but I can't hear you 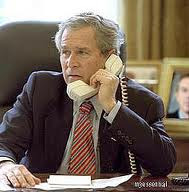 The most important tenet of any free nation that calls itself a democracy is that the people matter; their voices matter.. their needs and wants matter, especially when they get up, take to the streets and speak as one on issues of consequence.

And with 100% certainty, all supposed 'free' nations ignore the will of its populace and do what they wish even if the majority are against.  #OccupyWallStreet does not yet have a truly concentrated message so I don't speak of them, though once they develop a clear message, they are bound to be Officially ignored as well.

The last time the US completely ignored the will of the people was when Congress, under Gorge Bush's insistence, passed of the $700 Billion TARP bill in late 2008.  However, the last time the collective will of the American people were ignored where people actually took to protesting on the streets, was Bush's need to invade Iraq in 2003 to avenge Saddam trying to kill his Daddy, among other reasons.  We know how that turned out.

A nation ignoring its populace's wishes is nothing new but with certain nations, the effort to not only ignore protest but intentionally hurt their citizenry knows no bounds.   Today marked the second day of another Greek protest, how many of which over the last 24 months, I've truly lost count.   And the people keep taking to the streets- screaming, shouting, begging essentially for their government to stop squeezing every euro from the everyday people of Greece to pay bankers and investors. 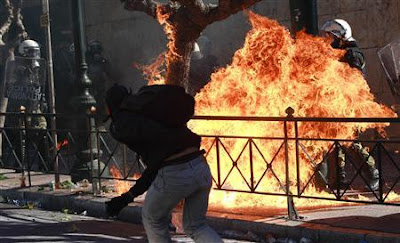 Today 100,000 people took to the streets.   That number may or may not seem big if those numbers were in America, but Greece has a total population of 11.3 million and in terms of land size, is just slightly bigger than Pennsylvania, so those numbers are a huge turnout.  The US has a population of approximately 312 million people, so in order for us to generate an outward protest of 1%, 3.12 million people would have to take to the streets.

Unfortunately, Greece's government is deeply corrupt and in the pockets of the IMF and ECB so the chance of protests working, is pretty minimal.  But at least the Grecian people have fight and truly understand what's going on.

From Reuters:  "Prime Minister George Papandreou, trailing badly in opinion polls, appealed for support from Greeks on the latest measures which include tax rises, wage cuts and public sector layoffs. But the mood was furious among demonstrators, fed up after repeated doses of austerity and increasingly hostile to both their own political leaders and international lenders demanding ever tougher measures to cut Greece's towering public debt. "Who are they trying to fool? They won't save us. With these measures the poor become poorer and the rich richer. Well I say: 'No, thank you. I don't want your rescue'," said 50-year-old public sector worker Akis Papadopoulos."

So many people of so many nations are sick and tired of the economic inequality-- here's a partial list of all the nations that have had anywhere from peaceful protests to outright revolution over it in 2011 alone -- USA, Britain, Ireland, Portugal, Spain, Greece, Italy, Egypt, Tunisia, Bahrain, and Algeria. 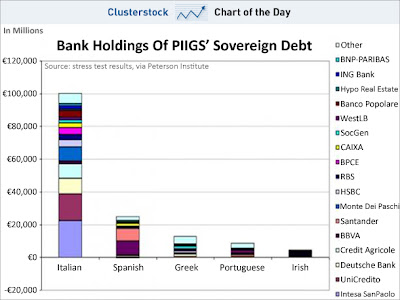 ~ Chart shows how much debt banks collectively are holding from PIIGS nations; the figure on far left is in millions of euros

Currently, France and Germany are taking the lead in EU negotiations as to how many billions or trillions of euros it will take to backstop the entire European banking system and the PIIGS nations, money that comes out of the people's pockets.  They've been rather stoic and quiet so far--  let's see how long that continues once something is passed and Europe truly sees how much money they're All on the hook for.

There's a saying--  'You get what you deserve and you deserve what you get',  and for anyone unhappy with their government who do not wish to get in the scrum (and I don't mean violence) and try to make any difference, even if odds are stacked against you, that motto applies.