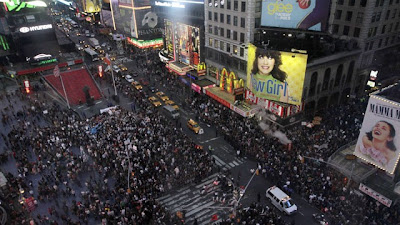 ~ Times Square, NYC
As we enter the 2nd month of the #OccupyWallStreet movement, we at A&G  really haven't spoken much on it.   Why?  Well to be honest we haven't been able to find a consistent, cohesive message to it so hard to say how much of it we embrace.  That's not to say we don't 100% support those expressing anger at Wall St and the banks; the greed, corruption and insatiable need for power and profit--  we support the protest wholeheartedly and wonder out loud, what took you all so long?  Kinda had been waiting, oh I don't know, 3 years for it...
The closest thing to a consistent message to the movement has been to tax the very wealthy.  Once again, we're in agreement.  But then things get confusing.  Some hate government and authority, yet others love and desire it very much, but just choose to place the blame on one political party's shoulders, expressing fury specifically at Republicans while avoiding any criticism of Obama's complete economic ineptitude-- Sorry, but Obama is as much of a Fuck- up as Bush was, and BOTH are bought and paid for by Wall St.
As much as we believe every single Republican candidate is deeply ignorant to the economic realities facing this nation (and its intentional-- the hardcore fiscal Conservatives have made it abundantly clear they will never support a fair-minded moderate again)  and would cause great damage if elected, we're not about to support or endorse any movement that is secretly "Obama 2012" either.
Some of the demonstrators deeply hate Wall St and understand what it is about.  Others are actually pro-Wall St but want more fairness.  In other words, they perhaps were investing in the market and want things to smooth so they can get back in the game, or currently are invested through personal savings or 401k and afraid for their nest egg.  All understandable motivations but also deeply selfish.  For people like that, would it be fair to assume then that as long as one's personal finances were secure, it would be completely OK for banks and corporations to continue receiving trillions of dollars in government handouts, pumped into the market by the Fed? 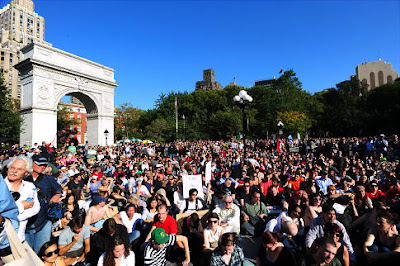 ~ Washington Square, NYC
And speaking of which, why isn't this movement called "Operation:End the Fed"? That would make far more sense. Is it because most people don't have the slightest clue what the Federal Reserve does or all the long term economic damage Ben Bernanke has done, all under the artful guise of 'saving' the economy from a depression we're already in?
It is said that the President of the United States is the most powerful person in the world.  No, this is false.   The most powerful person is the US Fed Chair.  He can manipulate currency to devalue or strengthen the dollar as he sees fit. Remember the US dollar is the global reserve currency so his decisions affect 6 billion people essentially. He can also determine interest rates which affect everything from borrowing/lending to how much or little savers get on their money through checking accounts, CDs, etc.

Bernanke has not only wasted trillions of taxpayer money to artificially inflate the stock market but has given trillion to European and Asian banks in 2008 to try to stabilize those regions.. American taxpayer dollars.  The only reason this is even known is due to a provision in the Dodd-Frank Act which forced this disclosure.
So the big question everyone is asking is will this movement have legs; will it carry on or fade?  Very hard to say.  Really depends how sincere those who are demonstrating are and how committed they are, especially with colder weather approaching.  Can the movement get some clarity in its message?  What specific change(s) if any are they seeking and can they develop among them a coordinated plan to get that agenda through?
This last question is among the most important and taboo-- will the #OccupyWallStreet movement stay peaceful or will it decide being peaceful is not accomplishing much?  This is a tricky one- we're always conditioned to reflexively say, yes- stay peaceful, that's best.  But there's realities to any protest--  How much can one accomplish holding a sign?  How long before the media gets bored and doesn't even cover it?  Assuming there's ever to be a cohesive list of grievances/demands,  how realistic is it to expect them met when no one fears the protesters (See the Wisconsin protests- early 2011)
Governments say publicly they will not negotiate with terrorists or violent provocateurs.  Pretty interesting then that a couple weeks ago the US Government paid Iran $500k each for the release of two American hikers held hostage.  Also interesting that very recently Israel and Hamas agreed to prisoner swaps.  Take a moment or two to think on those actions vs their public policy statements. 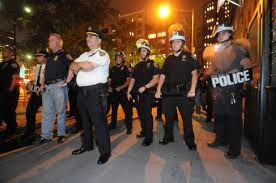 ~ NYPD's Finest.. always looking for a Fight
Truth is, more often than not, if any violence is going to occur at these protests, the police will either  provoke it or overtly make the first move.  They sure do love using batons and tear gas- i.e. Greece, Egypt, Tunisia, Syria, Italy, France, Britain, etc..  Police also like blending instigators into the crowds of demonstrations who then commit violence and allow the police perfect excuse to beat the protesters down, while the media demonizes the protesters as anarchists, rabble-rousers, inciters and terrorists.   And if you think this does not occur, respectfully stated, you're Deeply naive.
So ultimately if I had to make a prediction, without some kind of obtainable goal or objective, the #OccupyWallStreet movement will fade by December and just be a historical footnote.   But if it can find some leadership and express both achievable short term and lofty long term goals,  it will develop into a true movement to be reckoned with, especially as Election 2012 approaches.
Posted by dsasR at 12:31 PM