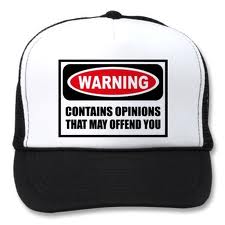 ~ Or you may not be offended.. nice hat though, yes?

Well, we're Still recovering from yesterday's market insipidness-  we can rant and rant but short of an act of God, very little can stop the System from screwing over the bottom 99% while 53% play the role of loyal lapdog to the Corporations.

That said, we never stop fighting.. neither should you.

Anyways, its Friday evening so time for some quick comments to real headlines:

The Only Way to Avoid Another U.S. Recession (Yahoo!) --  The article states: "The one thing, the only thing, that can save us from a recession in the first-quarter of 2012 is the great bearded one. No, not Santa Claus. Santa Bernanke."  Funny-- everyone's trying to save America from a 'recession' yet we're in year 4 of an ongoing depression.  Maybe the one thing we need to save us is Santa Christo.

The Economic Agony of Today’s Twentysomethings (Yahoo!) --  We know the stats: average student debt at $24k, unemployment higher than national average, etc..  but let's not forget the agony of hearing politicians tell them its going to get better soon while Generation Huh! is being forced to watch nonstop commercials on TV selling them shit they don't need with money/credit they don't have.. That's agony.

U.S. Confidence Rises in Sign U.S. Will Keep Recovery Intact (Bloomberg) --  Yep, it rose a whole point and a half: from 59.4 to 60.9. Wow.. 100 would mean healthy confidence.  Think of it like school- if your child's test taking abilities improved from 59.4 to 60.9, would you brag?  Bloomberg felt like it.  Oh, did you know-- The Consumer Confidence Index is based on the data from a monthly survey of 5000 US households.  There are over 310 Million people living in the US.  Accurate barometer of mood of nation? Um, No.

Bank of America Starting to Scale Back Debit-Card Fees (CNBC) -- Guess you can add B of A to a list including Netflix, all Airlines and hmm, well Every Single corporation in existence that tries to squeeze blood from a stone by adding fees, surcharges or additional expenses onto a general public who is sick of it and actively fights back, then the company retreats with tail between legs.  If only the American people could stop using Bank of America altogether and put their $$ elsewhere.  Oh what a beautiful demise that would be.

No Scrooge Here: Analyst Sees Best Holiday Sales Since 2004 (CNBC) -- The propaganda bullshit machine never stops does it? Anything to exude confidence.  Here's a headline on the same topic last week: Experts predict ho-hum holiday shopping (Reuters 10/20) -- "U.S. shoppers plan to spend an average of $704.18 on holiday gifts and seasonal goods this year, down nearly 2.1 percent from the $718.98 they spent in 2010, according to a survey issued by the National Retail Federation yesterday."  Oh who to believe... the market loving maggots at CNBC or Reuters? Hmmm...

NBA Deal Closer? (AP) --  The NBA..  what is that?   Kidding, its the professional basketball league.  Basketball- a game that is played in 48 regulation minutes but the last 2 minutes of the game take 30 minutes to finish.  If there's no season, what will I watch?  I am really going to miss Olympic Curling


‘It Gets Heated’: Twin Sisters Divided Over Occupy Wall Street (ABC News) -- One sister supports the OccupyWallStreet movement while the other doesn't.  In other "News", two brothers are divided over who to root for in Game 7 of the World Series, and a married couple of 50 years can't decide which is better chocolate or vanilla cake?
Posted by dsasR at 3:37 PM