The Mindset of Profit from Destruction

There's a scene in the 1995 film "The Fifth Element" where evil corporatalist Zorg played by Gary Oldman explains to the priest Cornelius (played by Ian Holm) how society can not survive and/or grow without destruction.

To illustrate, Zorg pushes a glass off his desk which shatters into hundreds of pieces and then at a touch of a button various machines are released which work to clean up the mess.

And during this demonstration, Zorg states:

"Life, which you so nobly serve, comes from destruction...  (and) by that simple gesture of destruction. I gave work to at least fifty people today. The engineers, the technicians, the mechanics. Fifty people who will be able to feed their children so they can grow up big and strong.  Children who will have children of their own, adding to the great cycle of life!.. By creating a little destruction,  I am, in fact, encouraging life!" 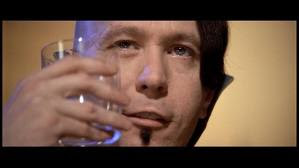 This is how corporations and Investors and financial news pundits and even to some extent politicians think.   It was the mindset of many people in the world of finance after the devastating Japanese tsunami of March 2011 and there was genuine money-making excitement over Hurricane Sandy as their countrymen and women perished amid the destruction.

And that means you had articles with headlines like this: 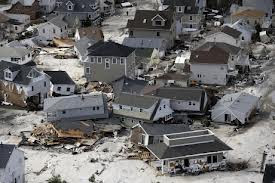 Even absolute piece of rif-raff moron political pundits got into the act of turning Sandy into a positive for their ideological dreams.   On Election night on MSNBC's, Chris Mathews expressed that he was "glad" that Hurricane Sandy hit when it did because it led to the re-election of Barack Obama; "I'm so glad we had that storm last week" because it "brought in possibilities for good politics."

Of course in a perfect world, he'd be hot-tarred n' feathered and then lit with a match..   But on MSNBC, it probably got him a pay raise instead.

We're a bit sensitive to it, we admit.

We here at 'A&G's homebase didn't suffer to the extent of Staten Island's poor souls or those who got hit pretty hard on the entire New Jersey coastline... But we did have a rough go of it for four days..  Zero power.. continual dropping in temperature..   incredible difficulty finding basics such as D batteries or 16oz propane canisters to work a heater or cooking grille.. 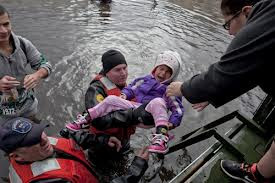 ~ 'It's OK little girl.. you almost died but it was for a good cause'

To be in the aftermath of anything.. a hurricane or tornado or earthquake..  Once you know all those you love and care about are safe, its a very depressing, demoralizing and nerve-wracking experience.  The only real differential is in degrees of adaptation.

While we always know these heartless, soulless carnivores exist out there, its never easy to digest especially when others' suffering is for their economic or political benefit.

So we want to do an exercise here...  We're going to try to delve deep into the mind of the ethically depraved, temporarily turn off the morality mechanism in our collective brains and look at Hurricane Sandy and its aftermath as only a positive.  And we won't let dozens of needless deaths and tens of thousands of now suddenly displaced or completely homeless people who weren't so before Sandy distract us... 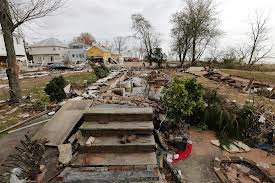 We must concentrate hard to walk in these people's shoes...

OK, let's see.... First, every home that was destroyed has to be either repaired or rebuilt from scratch which means that there will be a boom in construction and specifically housing starts.  That's a lot of people with jobs!  Great for the economy...

Combine this with even all the minor do-it-yourself repairs that people will be doing, and it means places like Home Depot and Lowes should make a killing which will be bound to push up their 4Q dividends and benefit shareholders... Yayyy!

And all those replenished supplies-- the hundreds of millions of bottles of bottled water purchased... and the batteries... and the trash/contractor bags to hold all life's possessions now damaged by water...  and so on... Goodness, just think if not for the storm, people would never have purchased such items in mass bulk.. Those companies who provide such items are sure to see their stock prices rise... 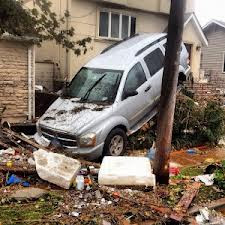 And all the vehicles submerged in water or flooded enough that the saltwater from the ocean made their vehicles inoperatible...  Well just imagine the nice jolt to the automotive industry to see thousands upon thousands of people flock to buy cars that if not for Sandy, they probably would not have in the near future.  And all those people who make cars.. Oh how exciting to build new cars to keep up with the demand, yes!

And what about all that beach erosion and coastal damage that wasn't there before?  Now you got people working... cleaning up... rebuilding...  making everything ultimately better than before...

~cue patriotic music in background (soft at first then building to crescendo)  Yess!!  Think of it...  Americans helping Americans... Working hard in their communities and with their neighbors.. Black and White... Demonstrating the Strength and Resolve of the 'Can-Do' American Spirit... and with a Strong, Courageous President leading the way for four more years...  USA! USA! USA! 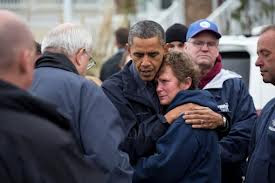 Now how can Anyone dare say Hurricane Sandy was a bad thing??

Why to paraphrase Chris Mathews again, its enough to give collective shivers down our legs...

Only so much of that roleplay we can take before becoming sickened...

Enjoy your weekend & continue to keep those who suffered and continue to in your hearts.  The media may have stopped covering, but it doesn't mean everything's back to normal.
Posted by dsasR at 9:26 AM