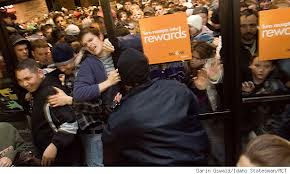 We hope everyone who celebrated Thanksgiving yesterday had a lovely one... and time, like the albatross around our necks, moves on...

And today is 'Black Friday'...

It used to be just simply 'Friday' but then around 15 years ago, the word 'Black' was added to represent supposedly the first day of the year that retailers would be in the "black" as opposed to being in the 'red' which means essentially more money going out (product, salaries, etc..) than what's being taken in.

We remember when this concept of 'Black Friday' was first introduced in the mid 1990s.  It had an organic quality-- just seeming to develop and expand on its own.  Don't get us wrong-- for many decades people have always gone shopping the day after Thanksgiving for special deals and values while jump starting the holiday season.

What changed was that it developed by retailers into an 'Event'...  A store that normally would open for shoppers at 9 or 10am would instead open its doors at 6a.   And instead of just having good sales, what was needed now to draw in masses of customers was blockbuster specials. 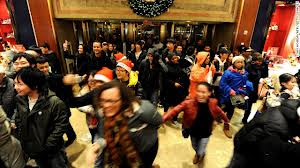 And Black Friday quickly grew in interest as every year, more and more people would stand outside and wait to buy DVD players, computers and televisions.

And once the stores had the public hooked, something interesting happened-- the quality of the sales decreased-- Dramatically.  And once 6a wasn't a big deal any more to open a store, the new time was midnight, and now this year at Target and others, 9p... on Thursday.

Thanksgiving to retailers is now simply a nuisance where people dare to put family over shopping.

And as we said before, the Black Friday "sales" are really pretend sales.

For instance, Yankee Candle's big sale is if you buy 2 candles, you get 2 free.  OK, that is a good value... Problem is that's the Same promotion running for the last 3 weeks.  If you were on Yankee Candle's mailing list, you would have received the coupons via email. 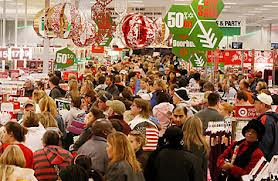 CVS Pharmacy is advertising that everything regular price is 25%.   OK, that's nice..  but the thing is if you subscribe to their mailing list, you will receive 25% off regular priced merchandise.... Weekly.

Bed Bath & Beyond is pushing their 20% off  and 'Save $5 off a $15 or more purchase' coupons off any regularly priced merchandise as if they are rare things to behold.  All you have to do is get on their mailing list and you will receive those promotions monthly.

Kohls department stores has promotions where you can save up to 30% on purchases... One of our staff is on the Kohl's email list and we're told with no exaggeration that they send out email coupons every single day i.e. a never-ending sale!

TGI Friday's restaurant is offering 'Buy 1 entree, get 1 Free' which once again, is a Standard, run of the mill promotion that they send to those on their email lists.

If you go on Applestore.com, you will see the annual one-time-only sale on Apple brand products... a 'Whopping' 8% off... I guess some people see "sale" differently than others.. 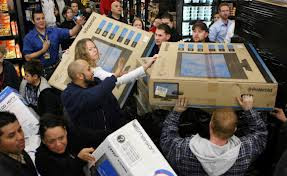 On and on..   For every genuine deal a store has which is meant as a front door blockbuster deal, there are thousands upon thousands of items at a multitude of stores which are nothing more than standard, run of the mill discounts with a shiny 'Black Friday' ribbon.

And people will shop and spend and charge for things they really don't need to buy for people who in all likelihood will turn around and return/exchange.   And they will put themselves further into debt so that they can have one special day of joy and/or pre-recession normalcy while forgetting that there is a Dec 26th..and 27th..and 28th...

And all the ignorant financial pundits will look at the crowds of people and the dramatic uptick on cred card use, and thus all will be misconstrued as the example of a bustling economy, which of course it isn't.

And Black Friday leads to Cyber Monday.. another modern contrived 'holiday' which has taken a life of its own followed by at least 28 shopping days till Christmas...

Its enough to make one go 'Bah Humbug!'