Kluge: The Haphazard Evolution of the Human Mind

I polished off Connected (excellent), and now on the reading stand is Gary Marcus' Kluge. Seems like another bargain book winner. 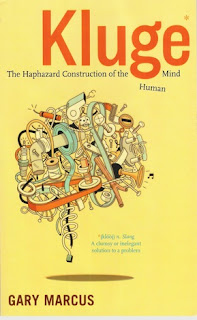 Kluge: The Haphazard Evolution of the Human Mind by Gary Marcus

How is it that we can recognize photos from our high school yearbook decades later, but cannot remember what we ate for breakfast yesterday? And why are we inclined to buy more cans of soup if the sign says "LIMIT 12 PER CUSTOMER" rather than "LIMIT 4 PER CUSTOMER?" In Kluge, Gary Marcus argues convincingly that our minds are not as elegantly designed as we may believe. The imperfections result from a haphazard evolutionary process that often proceeds by piling new systems on top of old ones—and those systems don’t always work well together. The end product is a "kluge," a clumsy, cobbled-together contraption. Taking us on a tour of the essential areas of human experience—memory, belief, decision making, language, and happiness—Marcus unveils a fundamentally new way of looking at the evolution of the human mind and simultaneously sheds light on some of the most mysterious aspects of human nature.

From Publishers Weekly
Evolution seems a rushed process in which traits and attributes of humanity have been pieced together to make a functioning but far from perfect or rational being. Marcus explores the ways in which the human mind, while magnificent in its overall ability, still stumbles on several points. Focusing on areas such as memory, decision making and language, Marcus keenly identifies the makeshift devices humans have created in order to contend with what he describes as "evolutionary inertia."

A university psychology professor who periodically writes for mass media, Marcus here punctures the high regard humanity has for its species-distinctive qualities. Whether it’s memory, rationality, language, or free will, our noble human traits are hopelessly entangled with our baser drives, which have survived the dynamics of evolution. Blending discussion of experiments from cognitive psychology with speculation about why people are far less logical than they believe, Marcus latches onto the term kluge, which comes from the engineering world and is jargon for a fix that ain’t perfect but good enough. It’s a productive figure of speech for Marcus’ argument that deliberative thinking probably had an evolutionary advantage (save seeds to plant next season), but seems in permanent conflict with reflexive impulses having more ancient evolutionary advantage (eat seeds now). Carrying the point across a gamut of behaviors, from money to mental illnesses to talking, Marcus develops his idea of the klugelike mind, in which emotion perpetually besieges the intellect, with appealing clarity. -- Gilbert Taylor

"Marcus's emphasis on the peculiar quirks of our minds -- or odd decisions and weird interpretations -- makes for a fascinating, self-referential read -- Marcus's book makes "kluge" an indispensable term for explaining the human mind." (Seed )

"Invigorating fun...inspired, one of those unexpected analogies that help us look at everything afresh." (New York Times Book Review )

"A shot across the bow of intelligent design." (Kirkus Reviews )
About the Author
Gary Marcus is a professor of psychology at New York University and director of the NYU Infant Language Learning Center. Marcus received his Ph.D. at age twenty-three from MIT, where he was mentored by Steven Pinker. His writing has appeared in the New York Times, Newsday, the Los Angeles Times, and other major publications. He lives in New York.
Posted by dsasR at 7:49 AM