Making Fiscal Cliffs out of Molehills 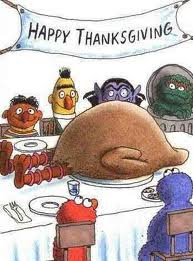 Last week we stated we expected the shortened week before Thanksgiving to be when the market produced an artificial spike (or in layperson terms, a bullshit rally).

The main reason for this we saw was that we understand the natures of those greedy, dirty-dark Investor souls who would look at the market drop over the last month as a nice 'dip' which translates into their warped little minds as "excellent buying opportunity"

Fundamentals and truth be damned...

"The Dow was up 155 points midday Monday while the S&P and the Nasdaq were each up over 1.5% in a rally largely attributed to hopes for a deal to avoid the fiscal cliff" - Yahoo Financial 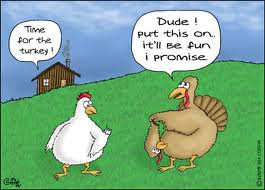 Then of course, the Investors expect what is known as the 'Santa Claus' rally where stocks go up and up and up in December just.. well, just Because...  Remember, these jackals can't make a living off the 'sell'.. it always comes from the 'Buy!'

Now to provide some 'justification' for public consumption is the Lie that a fiscal cliff deal is very doable (hardly!) and close to occurring (which it is not) and those common, deeply-stupid American average-Joe investors who do not look (or think) before they leap, will feel confident to re-invest.

Without the average-Joe dum-dum feeling good about the economy and the naive belief that the market can only go UP, where is the fresh money going to come from which the big players make their profit from? 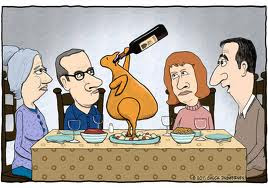 In other words, if the professional Investors own Stock X at $20 a share, without the mom & pop investors and eTrade day-traders looking to get some kind of return on their money deprived to them from intentionally anemic interest rates on saving, how else can those shares climb to $25?

They are the 'fresh money'; the guppies in the shark tank..

And the politicians all play into this Con such as the announcement by Obama and Republican House Majority Leader John Boehner that they were both confident a deal could be done which caused the Dow to jump like trained seals about 50 pts on Friday...

But can a deal really be done?   Well... anything's possible..  Just going to take one side to give A Lot in concessions to the other..  But is that realistic?  Let's look at the combatants:

In one corner, you have the President who has to be feeling Great that he defeated Romney for re-election and did it so handily.  And he had to be smirking as he watched all the Republicans move into a circle with Romney figuratively in the middle, then let the "guns" of blame go off ablaze. 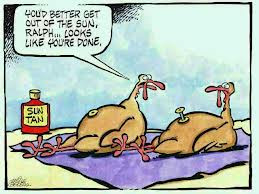 Do you really think a President mere weeks from a strong re-election victory is in a position where he needs to make concessions?  It reminds us of the famous quote of George Bush after he soundly beat John Kerry in 2004 for re-election..  Bush said: "I earned political capital, and now I intend to spend it"

Trust us.. Obama feels the same.

And in the other corner:  The defeated Republican party; the party of those Evil Tea-baggers who never met a social program to benefit the poor, elderly and/or needy they didn't want to slash to pieces...  A political party that honestly believes in the foolhardy notion that the way to stimulate the economy is to tax the extremely wealthy Less so they can expand their profit in the hopes that pennies will "trickle down' from the heavens'

They're angry and bitter over the election and if they compromise now, they are going to look utterly inept and effete to their core constituencies... So no way in hell they make the negotiations a smooth, orderly process. 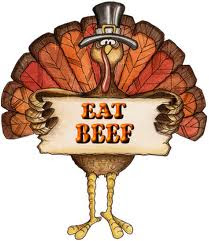 So if anyone expects a compromise to just automatically occur, is devoid of understanding politics or basic human nature.  Like we said, there is a chance a deal will be reached by year's end since after all, they Are politicians and that's not a profession where backbone is required, but one side will have to eat major crow and capitulate to many core demands for a deal to get done.

And seeing that the President has 50 months left in office (counting the end of his first term) and really no reason to cave in to politicians who still have to run for office every 2-4 years, we see Obama having the upper hand.

And if there's no deal...  well its certainly not the end of the world.  Stocks will drop (deservedly) and the US dollar will finally strengthen after 4 years of domestic sabotage as investors flee to the reserve currency for protection. And this strengthening of the dollar will combat the current spike in inflation to keep it in check when buying products/services...

Guess you all can figure what we at 'A&G' are hoping for... 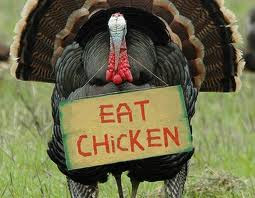