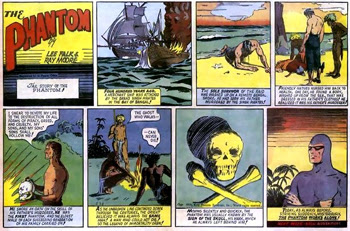 After the success of his Mandrake the Magician, the King Features newspaper syndicate asked Lee Falk to develop a new feature. His first attempt was a strip about King Arthur and his knights, which Falk both wrote and drew. However, King Features turned this down, and Falk developed the idea of The Phantom, a mysterious, costumed crimefighter. He planned the first few months of the story and drew the first two weeks as a sample.

Inspired by his lifelong fascination with myths and legends, such as those of King Arthur and El Cid, as well as modern fictional characters as Zorro, Tarzan, and The Jungle Book's Mowgli, Falk envisioned the Phantom's alter ego as rich playboy Jimmy Wells, fighting crime by night as the mysterious Phantom.

Partway through his first story, The Singh Brotherhood, before revealling Wells was the Phantom, Falk changed the setting to jungle and made the Phantom a seemingly immortal mythic figure. Deciding there were already too many characters called the Phantom (including the Phantom Detective and the Phantom of the Opera), Falk had thought of calling his hero "The Gray Ghost" (which later became the name of a Batman character, a fact alluded to in the first episode of Phantom 2040). However, Falk could not find a name he liked better and finally settled on the Phantom.

In the A&E American cable TV documentary The Phantom: Comic Strip Crusader, Falk explained Greek busts inspired the idea of the not showing the Phantom's pupils when he was wearing his mask. Ancient Greek busts displayed no pupils, which he felt gave them an inhuman, awe-inspiring appearance.

In an interview published in Comic Book Marketplace in 2005, Falk said the Phantom's skin-tight costume was inspired by Robin Hood, who was shown wearing tights in films and on stage.