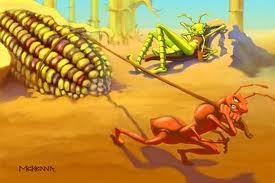 Our blog is called 'Ants & Grasshoppers' and it has been growing in readership by leaps and bounds since its inception a mere 15 months ago.  Thousands upon thousands of you visit here, and currently we are viewed in over 45 nations.  To this, we say a sincere Thank You.
But this posting is not about self congratulation. Rather the goal is to explain something that may or should be apparent but isn't often so--  what really is the difference between the ant and the grasshopper?  Certainly as the original Aesop fable illustrated, the ants were hard working and industrious; always preparing for the oncoming winter until there was no more food to gather and with first wintry wisp of wind swirled about.
The grasshopper basically played his fiddle and did little jigs, assuming all would work out alright in the end.  In some versions of the story, the cold, hungry grasshopper is taken in by the kindly ants who share some of their food, and all live happily ever after.  In other versions, the ants rightfully scold the grasshopper for being a lazy layabout and bugger of a beggar,  thus letting him starve and die in a freeze, which the grasshopper does. 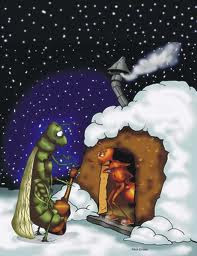 Now, let's take this premise into a modern context.  For example, when there is an approaching hurricane or major snowstorm, what does the ant vs grasshopper do to prepare?  Well, a very smart ant might know that they live in a part of the world where hurricanes or fierce snowstorms are yearly possibilities and have basic supplies (water, canned food, batteries,etc.) set up well before any weather report.  But even if not, the ant will go to the supermarket with a couple days to spare.  He/she will purchase food that isn't electricity dependent, gather other supplies from places like Lowe's & Home Depot to protect their dwelling, take emergency cash from bank, fill the car tank with gas, etc.   Essentially the ant will put him/herself in the very best position to survive and deal with unexpected contingencies.

The grasshopper will tend to a-hem and haw... and yawnn.. and bitch and bellow that its not going to be so bad and continue with their daily routines.  Then in the final 24 hrs or so when it clear the weather event will be terrible,  he/she will only Then go to the supermarket where shelves are near bear, and stand in endless lines.  The grasshopper will look to others for assistance because of an ignorance or stubborn unwillingness to make any preparation steps on their own.  The grasshopper will expect coddling since it is so accustomed to being coddled by government; everything magically working out, i.e. how the Fed steps in and artificially propping the market, banks and now Europe for over three Bleeping years!

One is self reliant.. intelligent.. resourceful.. a survivor..  One is simply pathetic. 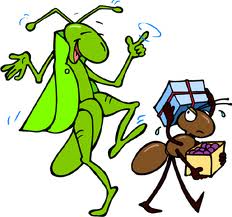 If you truly are the 'Ant', you should feel proud.  Sincerely.  There aren't many like you in this world... not anymore.  We're so dependent as a society on others and the government to provide everything and make everything ok.  Most have no clue how to hunt or fish or prepare food for cooking.  Many people would be completely helpless if electricity went out for extended period of time- how to keep cool (or warm depending on time of year), how to wash clothing, etc..

Nothing about basic human survival is ever taught in public schools so unless you come from a family where this knowledge can be passed down or you've experienced a powerful hurricane or other act of God firsthand, chances are, there's still much you have to learn.

But let's go beyond this because the ability to survive something bad is not the only way to differentiate between 'Ant' and 'Grasshopper'.   Do you seek to stay informed and in touch i.e the news?  If someone presents information to you that is negative or troubling, do you really Listen or do you instantly change the  subject?  Or minimize it as affecting others elsewhere and thus not worthy to make a fuss of?  Do you believe things are getting better, and if so is it because you know specifically why or do you simply believe and hope it? 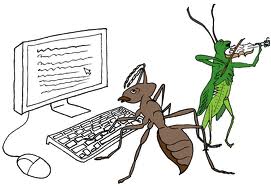 The ant pays attention to the world around him/her.  The ant knows whats going on in their neck of the woods and any other parts of the world where the ant's survival may be affected in some way.  The ant makes contingencies; prepares.  Even if nothing comes about and all is well, the ant isn't concerned about vanity or how others perceive.  The ant only wishes to put him/herself in the best position to survive and thrive.  The ant also gets pissed off-- he/she yells and vents and wants to punch the pavement in anger that others' are putting their lives at such risk.  Or course they do this After they prepared.

The grasshopper pretty much doesn't give a shit.  Whatever..  La La..   He/she is more focused on themselves- focused on the moment; focused only on their specific life and its rots.   The grasshopper can't be bothered with the rest of the world--that's their problem and no matter-- ultimately everything is going to work out.  Governments will step in-- kick the can a bit..  problem  solved.  Grasshoppers think ants are stupid little creatures, hustling and bustling about when the day is so serene and calm.

So once again, which are you: an 'Ant' or a 'Grasshopper'? 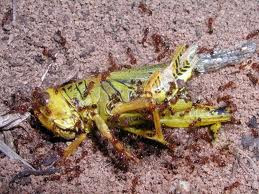