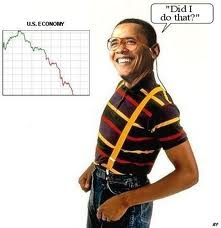 Back from Christmas weekend..
Nothing too much to write about today- nothing news worthy took place.
So instead, lets take a moment to play Nostradamus-- peer into the crystal ball, or make sense of the tea-leaves..
I saw this headline over the weekend from Yahoo Finance:
A Down Stock Market Guarantees Obama Will Lose in 2012 --  ""A lot of people look to elections to try to decide which way the stock market is going..." says Robert Prechter, founder and president of Elliott Wave International. "Mine is the opposite, I look for mood as the major cause."...  "We think the stock market actually is a better predictor of who's going to win the election, than the election is of where the stock market is going.  This coming year, if my scenario works out, stocks are likely to be lower. And if that's true, the incumbent is likely to be thrown out, not be reelected.""
I agree with both the assessment and the fact that 2012 will be a horrible year for the stock market as it finally wakes up to reality that it can't pretend all is well and get stronger while the global economy is seeping further into depression.  Eroding earnings reports between Jan - March will be wake-up, and then all bets are off. 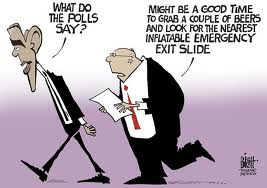 So what should one expect to see from government in '12?
Well, you better expect Obama to do Anything and Everything humanly possible to make sure the market shows a positive for 2012, even if the overall economy is the same or worse.  The market can go drop itself into an abyss in 2013, but this year-- Gotta Get Re-elected... Full Speed Ahead!
That's just how politicians think.  This one is no different.
And if the above headline is correct, expect Obama to tell Bernanke (though he really needs no prodding) to open the financial spigots and start Quantitative Easing 3, 4, 5 and so on--  trillions.. zillions..  quadrillions... whatever $$ created out of thin air and backed by nothing, to ensure the market has fresh money to speculate in, especially in commodities (Hello higher prices of food, gas, clothing, etc..)

Gotta get that Dow up.. gotta get re-elected.
And by the same accounts, expect Obama to direct the Federal Reserve and US Treasury to directly and covertly pump as many trillions of US taxpayer dollars as possible into Europe and their banking system to stabilize the euro zone with a nice one-year long can kicking.
No way in hell will the President allow the incompetents in Europe to mess with his re-election bid.   And remember, Sarkozy of France and Merkel of Germany are facing re-election in 2012 as well, so you do the math...
Now... it is A&G's educated opinion that in 2012, all the king's horses and all the king's men aren't going to be able to prop up this global banking cartel again.
Its THAT bad out there. 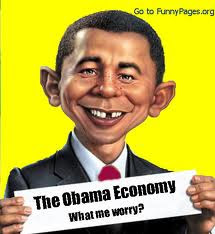 But still, you better expect in 2012 a concerted Full Push by Obama and all world leaders to keep this game going.  And with the right mixture of fear of unknown and naivety of optimism, most of the populace will be openly and actively wanting Federal action.

And I know.. I know.. those disgusting Republicans want the stock market to go up too...  Its really a shame how brainwashed most are into believing a strong market means a strong or recovering US economy.  The Dow should be at 8,000 if based solely on the reality of things.  That means its up another 33% through artificial and manipulative means.
Its really no different than the payroll tax deduction passage "celebration" last week..  I mean really, How stupid can people be?! --  To hell with social security's ability to remain solvent tomorrow as long as I, Mr or Ms Worker can pocket $20 more a week Today.

Your elected leaders are counting on that same mindset in 2012...
Posted by dsasR at 3:12 PM