This Joke is Not Funny Anymore

Actually when it comes to the markets and the hows, whats and whys of its ups and downs, its never been even remotely 'fun', but I love the music group The Smiths and the header is also one of their great song titles, so I get to pay homage and stay on topic.. win-win...

Anyways.. onto the drivel which is the market--

Why is the market down?  Well the "Super Committee" made up of Dem and Rep politicians who are anything but super, can't seem to agree how to gut open the Federal Budget.  Both sides agree there will be a lot of pain from all the slashing and burning of social safety nets and other beneficial programs (elitists call them the snooty word 'entitlements')  Its just the Reps want to slash and burn more pronounced than the Dems- they want the poor to really Feel it when the Knife is jammed in deep... And oh yes, they want tax cuts for themselves and corporations.

'Right', you say.. but why is the market down so much?

Well all these supposed smart people who went to business school and got MBAs in greed and selfishness seem quite startled to find that Washington is gridlocked.  They were all so assured everyone at the table would band together for the greater good of Investors ~cough~  I mean the nation and cut everything in the budget (except military) to the bone. 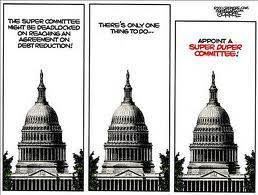 So now Investors are unhappy..  ~wahh wahh~   They just don't know where to make profit.  Do they invest in Japan where their economy has been in a two decade malaise and only 7 months ago suffered a tsunami that at the time generated pee-in-pants excitement from all the know-it-alls like Jim Cramer & Larry Kudlow of CNBC, declaring it "an excellent buying investment opportunity"?  For the record, economy recovery in Japan is still meandering in a stagnant holding pattern.

Do the cockroach Investors dare to invest in Europe where the Eurozone looks to explode or implode depending on which way the wind blows, and what direction the sucking of national treasury from Goldman Sachs backed technocrats is coming from?

And now America's leaders can't agree on anything--surprise..  and it looks like among other things, the US credit rating will be downgraded again in due course, which causes eventual downgrade for the zombie banks and other financial institutions.. on n' on like a rolling stone..

Investors are getting frustrated..  Must make money... Must invest..

So today they're trying to send the Super Committee a message; to scare them into action and agreement by Wed since they like everyone else in the world focuses economic policy for the sole benefit and pleasure of the Investor class.  No one seems to want to make a global investor unhappy.

~  "Can't make profit and there's no rainbow jimmies on my cookies.. pfft"

So expect magic by Wed; some deal that pleases Investors while approximately 300 mill Americans (the bottom 99%) groan and bellow.  Then the market will spike.. the media will trumpet it... millions of stupid people will cheer and everyone will prepare for Friday shopping  (I think there's some holiday on Thursday about giving thanks or something but I need to re-check the Target ad to be sure)

Now it would be refreshing to be wrong-- to see no magic solution on Wed night; the Committee disbands without a solution and Investors end up deeply unhappy.. but I just don't feel That lucky.
Posted by dsasR at 12:42 PM