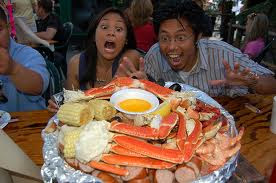 It seems the fight between the bottom 99% and the top 1% is annoying some people, even those like supposed ultra-liberal Alec Baldwin (who's also part of that top economic 1%) who expressed disagreement and annoyance with the premise in an article yesterday in Huffington Post about the OccupyWallStreet movement.

Some people feel its anti-capitalist and thus anti-American to dare to even think of putting limits on how much wealth a person can acquire, as if it is perfectly healthy and productive behavior for someone with hundreds of millions, if not billions of dollars, to actively pursue acquisition of even more wealth, particularly in their golden sunset Viagra years.

The more I sit and think on the topic, the more my thoughts are brought back to the experience of eating at a Chinese buffet.  The one in my neighborhood which I used to visit but not anymore, had all the basics you'd expect to find at a Chinese buffet-- sweet & sour chicken & pork, General Tso chicken, wonton soup, etc..  This buffet also had snow crab legs during the dinner hours. 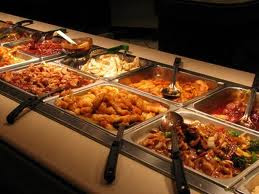 The crab legs were not great- usually super salty, but it was the only way to get any real value from a $12.95 meal since most other Chinese buffet foods are cheap, fatty and full of MSG, with desserts being no better.  Now most people such as myself would go up to the food station and place a few legs on our plate-- enough to enjoy while leaving legs for others.   Then there always seemed to be these fat sloths (in behavior, not necessarily outward appearance) who would stack their plate 6" high with legs then return to their table leaving nothing for anyone else.

Eventually a new tray of legs would come from the kitchen after everyone else had to wait 15-20min, and wouldn't you know, the same person or some other clever-clever selfish pig would stockpile all the crab legs on their plate too. Sometimes it would even trigger other people to become slothful themselves, acquiring more legs than they planned on eating just to ensure they wouldn't have to wait again which of course caused the new tray of legs to disappear quicker and more people to have to suffer & wait.

And because of this frustration and anger it would cause in other patrons, as well as sincere threats of never coming back i.e. loss of business,  eventually someone at the buffet would have to stand at the food station and limit crab legs per trip from the table.

Funny thing was, those thoughtless filthy slobs (once again, not implying necessarily outward looking dirtballs) who pillaged the snow crab tray to fill up their plates never Ever finished them.  Usually half a plate of perfectly edible crab legs were just sitting there.  But that never was the point was it... to eat all the crab legs...  it was simply to acquire them-- to possess while denying others, and to munch away while others had to pick the bottom of the tray or wait like good boys and girls for more to be brought out. 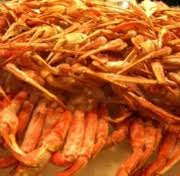 ~ Just about enough crab legs to satisfy a 1% person

To some people, the phrase 'all you can eat' meant 'all you can take' which is how the 1% treat wealth-something to continually acquire while manipulating and controlling the wealth potential of the bottom 99% This is followed by bitching and bemoaning how 'lazy' these people are and how its their fault they're not super-wealthy too a la Herman Cain.

Chinese buffet snow crab legs are the most honest and accurate example I can provide of the disconnect and detachment between the top 1% and the bottom 99%.   Those who have, want more, and especially when not based on need. They want more because they can...  And those who have not, will seem to tolerate the gluttons and sloths as long as there's something at the bottom to put on their plate.
Posted by dsasR at 10:04 AM