November 11th is a day meant Specifically and Solely to honor those who died while fighting in World War I (1914-18).  Over 70 mlliion military personnel including 60 million Europeans were mobilized during the war, and by its conclusion, the total number of military and civilian casualties were over 35 million-- over 15 million deaths and 20 million wounded.

Four empires (German, Austro-Hungarian, Ottoman and the Russian) and four dynasties (the Hohenzollerns, the Habsburg, Romanovs and the Ottomans) disappeared forever.  And while the Great War was supposed to be'The War to End all Wars', it did the opposite, sewing the seeds of hate which 21 years later, brought along the onset of World War II.

In America, all service people of all wars are simply lumped together into one big holiday called "Veterans Day"(started in 1954 so to include WWII and Korean War vets) which is a nice excuse for banks to close, department stores to give sales, and restaurants to give free drinks to those serving in armed forces, mind you that its with a purchase of an entree and proper ID.  Memorial Day is the same way; originally called 'Decoration Day' and meant Specifically and Solely to honor those who fought in the US Civil War, now it is an excuse to get drunk, have BBQ's and watch auto racing.

And on this commemorative holiday, life will pretty much go on as normal.  Adults working (if lucky to have work) & children in school.  Investors and traders continuing to plunder and pillage the global economy as leaders in Europe desperately conjure new tricks and schemes to keep the Eurozone solvent. In fact when you see France and Germany working together at the detriment of other Europe states, you have to wonder why did so many people have to needlessly fight and die 97 years ago; a generation cut in its prime?

And though the last soldier from that war passed away earlier this year, we at A&G give honor, reverence and remembrance to those who served and fought in World War I. 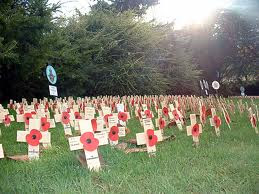