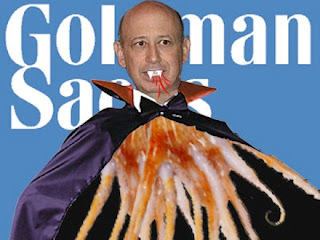 Actually, Goldman Sachs rules the world.. but lately its been running Europe, or at least various governments inside the continent.   They're called technocrats which is a fancy, polite way of saying people not elected by the people who enter a particular nation and run its government, enacting financial policies with the goal of squeezing out every last euro from the populace of such nation to re-pay the loan-sharks.. um.. banks and Investors.

The Independent UK wrote about this last week:

"While ordinary people fret about austerity and jobs, the eurozone's corridors of power have been undergoing a remarkable transformation.  The ascension of Mario Monti to the Italian prime ministership is remarkable for more reasons than it is possible to count... By imposing rule by unelected technocrats, it has suspended the normal rules of democracy, and maybe democracy itself.  And by putting a senior adviser at Goldman Sachs in charge of a Western nation, it has taken to new heights the political power of an investment bank that you might have thought was prohibitively politically toxic..."

"It is not just Mr Monti. The European Central Bank, another crucial player in the sovereign debt drama, is under ex-Goldman management, and the investment bank's alumni hold sway in the corridors of power in almost every European nation, as they have done in the US throughout the financial crisis. Until Wednesday, the International Monetary Fund's European division was also run by a Goldman man, Antonio Borges, who just resigned for personal reasons."
The article is quite lengthy and detailed- a very good read for those truly interested in pulling back the sheets to see who really holds power.
The chart below is a good cliff notes version of understanding: 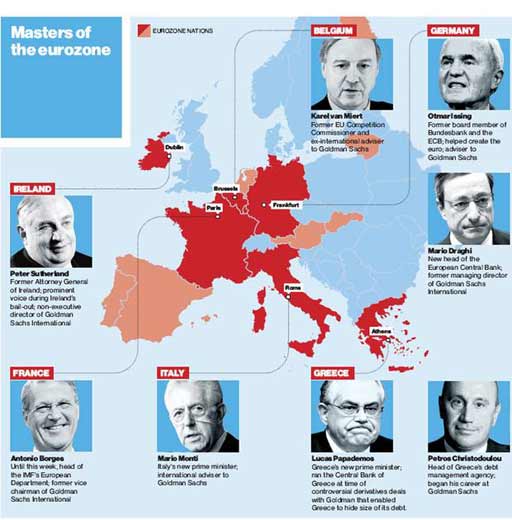 Sorry if its a little hard to read on the right side but I expanded the photo so one could read most of it without too much difficulty.  Here you can see former or current Goldman Sachs bigwigs in positions of power in Belgium, France, Greece, Germany, Ireland and Italy.  The Prime Ministers of both Greece and Italy are Goldman loyalists.
I don't believe its hyperbole to say this is the first orchestrated take over of sovereign Western European nations since the Nazis, but even More sinister for while Goldman isn't interested in religious ethnic cleansing, its neither interested in territorial conquest either... it wants wealth.. all the wealth of Europe-- its gold supply, its infrastructure..every last euro.  And when Europe runs out of paper currency, just get the ECB to print more... then take possession of that too.  And to keep the populace from total anarchy, you allow a tiny bit of the wealth to um.. 'trickle down' to the masses.
Because these Evil monsters don't enter nations with an aerial blitzkrieg or storm troopers on the ground, the European populace (like in the US) have been asleep and oblivious to the invasions.  But they've occurred and thoughts which first sounded like conspiracy theories and prejudiced rhetoric have come true and proved valid.
Goldman Sachs rules the world.. and its running Europe.
Posted by dsasR at 11:49 AM