The Truth about EU Summit #19 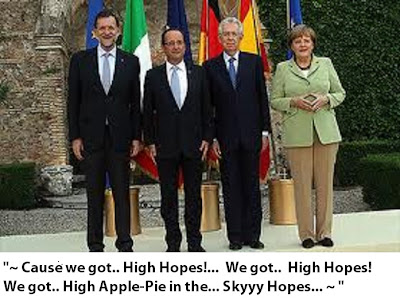 We thought our previous posting on why there's any spark in US real estate was going to be our final posting of the week.

Then we find out during the very late evening of a 19th 'make or break' Euro summit to save the rotten union, that Germany basically goes back on all its core principles at the last moment and caves to Spain and Italy:

"Euro zone officials have agreed to lend bailout funds directly to struggling banks rather than through each nation's central bank. The move has the effect of taking the governments of Italy and Spain off the hook for their beleaguered financial institutions by reducing their debt obligations. The plan also solidifies the unity of the Euro Zone at a moment when many questioned its survival.

The deal represents a meaningful concession by Germany which had previously refused to take on the additional risk of lending to the institutions directly and as a collective. The loans would be made via the €500b European Stability Mechanism (ESM) upon the formation of a European Central Bank (ECB) supervisory body." (Yahoo!) 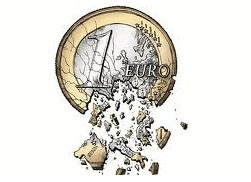 Of course like all fake "rallies", we are 100% certain this one will be quite brief and you will see a nice -200+ pt drop sometime next week when those vermin who make their living investing realize that absolutely nothing was accomplished except to kick the can another few weeks.. maybe.

We could take the time to explain all the reasons why this is so, but its Friday afternoon, the sun is shining and all that...   So instead, we'll repost a very astute and accurate analysis of the truth of yesterday's canard which was the 19th EU summit care of Phoenix Capital...

Some of the terminology and jargon may be confusing or unfamiliar, especially if you're a casual reader/follower of economics and global finance.  Don't let that scare you off.. Focus on the bigger picture and skim wherever you need to. Afterwards, you'll understand why the Eurozone is 'toast' and why investors who are excited by last night's news are utter morons.

*The rest of this posting are excerpts from Phoenix Capital, not us. Any underlined or text in bold was originally chosen by the original author.  However, to break up the piece as to be easier to read and follow, we added the pictures of tropical fish...

Have a good weekend... and keep your Euros next to your passports. "Everyone in the media is viewing the latest announcements out of the EU Summit as game-changers.

One facet of the deal is that ESM/ EFSF (European Stability Mechanism/ European Financial Stability Funds) loans to troubled countries will not subordinate private bondholders holdings.

While this does serve the purpose of allowing private bondholders to feel that should a country default, they might get their money back sooner (as opposed to what happened in Greece)… it doesn’t change the more critical issue of stopping defaults from happening...

None of the measures address the most critical issue pertaining to Europe: where is the money going to come from?

The European Stability Mechanism, which everyone sees as the ultimate savior for the EU, does NOT exist yet.  Only four out of the required 17 countries have ratified its legislation.

And the due date for ratification? July 9th.

So we have less than two weeks for 14 EU members to ratify the ESM. 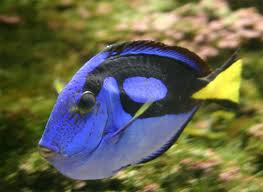 You couldn’t make this stuff up if you tried.

Another topic worth discussing is the fact that EU leaders didn’t agree to increase the EFSF or the ESM. The simple and obvious reason for this is no one has the funds to do this.

No one seems to be listening: Europe is out of buyers. End of story. There simply isn’t €500 billion lying around to be put to use. That’s why the ESM and EFSF aren’t being increased in size. They couldn’t be...

Oh, and none of this will go into effect until December. Let’s hope Spain and Italy and others don’t need the funds before then!

The benefits of the announcements (lower yields on sovereign bonds and higher share prices in EU banks) will be short-lived. 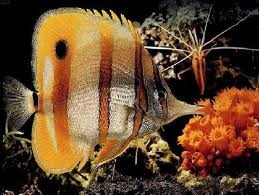 None of these decisions address the core issues facing the EU banking system: namely, insolvency and excessive leverage.

No one in the EU actually has the money to make these measures work (again, Spain and Italy will provide 30% of the ESM’s funding).

Markets will stage a knee jerk reaction to these measures. That reaction will see bank shares rise and yields fall, temporarily. But this move will be short-lived... After all, these announcements are just more political measures than anything else. And Europe needs capital NOT politics at this point...

EU leaders may have put off the Crisis by a few weeks (or perhaps even a month). But they still haven’t addressed the core issues causing the Crisis: excess leverage courtesy of hundreds of billions of Euros’ worth of garbage debt."
Posted by dsasR at 12:49 PM