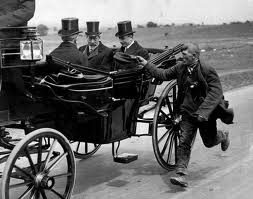 Today there's really not too much to write about.

That's not to say there isn't much going on in the world of economics and finance...  It's just that everything has reached such a predictable, stale pattern that there's no reason to write a long-winded analysis

Wall St Wants... Demands.... Expects!! the Fed to pump more $$ into the market via QE3 so they can increase their profits at the expense of the bottom 99%

The market jumped over 250pts between last Thurs & Fri in the Hope that Greece would trigger a global economic panic over the weekend and trigger QE3...  It didn't happen, so Monday the market dropped 25pts..

Bulls Bet On Something Big From Fed (Yahoo!)

"The U.S. central bank will most likely ease monetary policy when it meets this week... (According to Goldman Sachs) “We would be quite surprised if we saw no easing this week,”" (CNBC)

Evil People running this nation..  Evil People making a living off its demise

If/When it happens, do not cheer it or wave your flag in patriotic pride.  Because economically this nation (as well as globally) is falling further and further into the gutter. 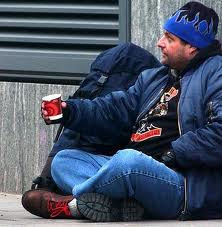 This is a desperation move.. pure and simple.

We find the whole affair simply infuriating.  What is going on is basically the equivalent of a dirty panhandler holding a tin cup and begging passers by for free $$, except the dirt and filth pleading for money are wearing expensive suits.

Its funny that the same group of people who thumb their noses and make a big stink over welfare, food stamps and social security as 'government handouts', are Always the first ones to run to the trough and suckle at the Federal Reserve teat for money when experiencing any losses.

The Federal Reserve, which is a private entity, not part of the US Government, was set up to work for the banks and Wall St.   As a result,  we hold out little hope of no QE3 tomorrow.

We do know for a Fact though that eventually Wall St will get its much deserved comeuppance...  There Will be a crash,  it Will be severe and A LOT of people who make their living in the profession of Finance will suffer catastrophic losses...