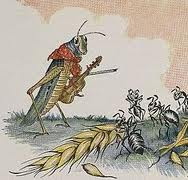 And much like Aesop's fable which was the inspiration for the title of this blog, 'ants' are industrious creatures; true survivors who pay attention to the world around them and prepare for all contingencies and would rather be safe than sorry.

On the other hand 'grasshoppers' hear the warnings but don't listen.  They see the signs but don't really look.   To them, everything will work out fine; someone will come to their rescue ultimately, so there's no reason to get all fussed up.  Just dance happy jigs while fiddling and laughing at all those 'silly' ants preparing for the upcoming winter.

But there's also a third type.. perhaps call it a hybrid of ant and grasshopper.  This creature makes contingency plans to prepare for worst-case scenarios yet does everything humanly possible to dissuade others from the truth so they can not make the same preparations for survival. 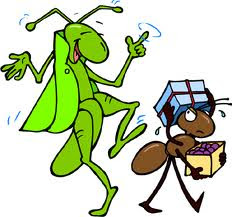 For example, take the EU...

"European finance officials have discussed as a worst-case scenario limiting the size of withdrawals from ATM machines, imposing border checks and introducing capital controls.. should Athens decide to leave the euro.

EU officials have told Reuters the ideas are part of a range of contingency plans. They emphasized that the discussions were merely about being prepared for any eventuality rather than planning for something they expect to happen — no one Reuters has spoken to expects Greece to leave the single currency area." -- CNBC

Not a single official expects Greece to leave the Euro do they?    They must know with 100% certainty how this Sunday's election will go.  And since its such an absolute certainly that all will end well, we suppose contingency plans to control bank runs and people fleeing nations in sheer panic is  just something one concocts for mere sport.

They work so hard and frantic to come up with a comprehensive plan to deal with something potentially devastating yet advice the populaces to continue 'dancing' & 'fiddling' away... 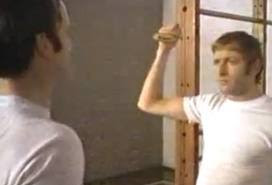 It reminds us in a way of a famous Monty Python sketch..

A self-defense expert is teaching others how to defend themselves vs a physical attack by another and providing contingencies for each type of weapon one may use. All very good and sensible so far.. except what are the 'weapons' being taught to protect against?

Yes, Fruit-- How to protect yourself vs a man who wishes to attack you with a banana or a raspberry.  And when one would keep asking the teacher how to protect oneself vs an attacker with a pointed stick, the reply was a curt "Shut up!"

And how does one go about disarming a man about to attack you with a piece of fresh fruit according to the skit?  Shoot him of course... 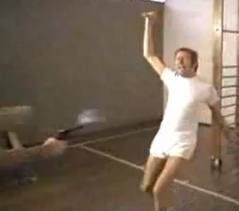 Its a funny comedy bit but its obviously not reality.

No one makes contingencies based on the unrealistic or the absurd. You don't prepare for snowstorms in Florida or hurricanes in Germany.  When a threat is credible, real and most importantly impending, that's when contingencies are devised and analyzed.

Here's the truth of things:  The fact that EU's financial officials are scurrying about trying to roleplay scenarios how to handle bank runs i.e. massive cash withdrawals, severe limitations and restrictions on physical movement between countries to prevent capital flight and to stem overall panic, shows genuine fear on their part.

It also shows how serious the EU is taking the possibility of Greece voting Syriza into power this weekend, and repercussions when the Greece tells the EU bankers to go to hell with their austerity.

And if they are taking things serious and making contingencies, then you best be doing so too Especially if you live in Europe.
Posted by dsasR at 3:26 AM