This Day in History: July 31 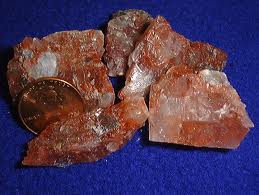 Really not much new or interesting in the world of finance and markets today and thus we will direct our energies today to something a little more interesting and worthy of thought..

As regular readers know, we enjoy introducing history into our posts because everything is interconnected-- past.. present.. future..   There was a world in existence before each of us was born and the people and events of the 'Then' affect us in the 'Now' even if in small or non-noticeable ways.

Admittedly not very much occurred in history on this date that we found particularly interesting except for this one nugget...

On July 31, 1790, the first U.S. patent is issued, to inventor Samuel Hopkins for a potash process.

Potash is the common name for various mined and manufactured salts that contain potassium in water-soluble form. (photo of potash at top of page)

But that in itself is not vital to know or remember.   Its the issuance of the patent that matters.

Patents are the lifeblood of the protection of intellectual property and thus provide the legal protections which allow great minds to create/invent products and ideas. 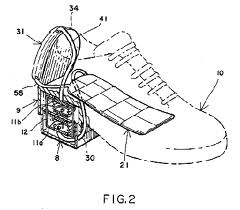 ~ patent photo of a shoe

Without them, barely anything gets invented or developed--  it just wouldn't be worth the time to a Thomas Edison or a Henry Ford to build new machines or technologies.  Anyone could just steal an idea or creation wholesale and make it 100% theirs without any credit or money going to the original inventor.

Patents are also the lifeblood of capitalism and what makes a national economy strong.   And there was a time when an inventor could acquire a patent within months.  The original US Patent statute was put into law on April 10, 1790 and Hopkins received his patent about 105 days later.

Now to receive a US Patent, you should expect to wait years and accrue many costs including patent attorney fees, a patent fee and maintenance fees as you wait and wait for approval...

Its hard to implement new products into the marketplace when an inventor has to wait years simply to receive the legal protections against intellectual or physical piracy, much less begin to turn a profit on such invention.

And of course, getting a patent to be honored internationally is a whole different bowl of headaches...

People like to ask, in retrospect what made America great?

Was it the Constitution?  Freedom... Liberty?  etc..

All important and valuable things definitely... but that isn't it..

It was people.. specifically the spirit of the Individual.  That's what made the US grow from a fledgling group of newly freed colonies to the large, prosperous nation we are today.

What exactly do we mean?  Aren't we still great?

The stifling of individual invention and creativity via the long drawn-out patent process today vs in the past is one example.  Here's another:  There was a time in this country, if one looked for work and there were jobs to be had, he/she simply inquired, was told the salary and if agreed, was virtually hired on the spot. 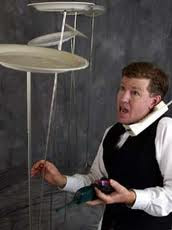 ~ "Yeah, I know.. spinning plates has nothing to do with the job I am applying for but my possible boss wanted to see if I could do this before he'd look at my resume.."

In today's society it rarely ever occurs.  Even lowly positions like waitress, custodian or waste pick-up require long applications to be filled with background checks, drug testing and every other stall & delay tactic an employer can think of so to make their subservient job seem important to keep.

In other words, there used to be greater mobility and freedom for the Individual.  He/she didn't like their job.. just quit and a new job was relatively easy to acquire.

Today, its set up where its so difficult to get hired even when jobs were aplenty, that the only way to have any semblance of mobility is to get hired for the new job first, then leave the wretched job you really wanted to quit months prior...

We've become a regulated society..everything from individual movement to the ability to create new ideas and businesses..   everything regulated but the one thing that desperately needs it.. Wall St.

As we've written before, history is an amazing thing... Often the events we think are important, end up forgotten and the 'insignificant' end up developing a future relevancy, even if for no other reason than to reflect how good things were compared to the present.
Posted by dsasR at 12:44 PM