Shilling for the Fed 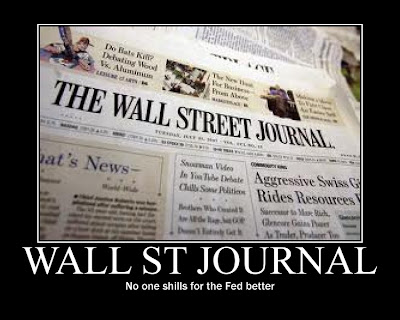 Question: How does a large entity, say the Federal Reserve communicate with Investors, bankers and the rest of the financial elite without actually directly speaking to these entities?

In other words, how does the Fed spread gossip, rumor and/or float 'balloons' to see how receptive the market will be to new policy without outright openly admitting it is doing so?

Answer:  It uses the media.

But not just any media... it uses a specific newspaper, or rather we should say, the Fed uses a specific reporter who works for a very influential newspaper to provide inside 'scoops' and special access in exchange that the information is reported without analysis and the Fed is always given a faux positive spin as if the private bank (The Fed is as government run as Fed-Ex) cares about more than preserving its self-interests

The writer's name is Jon Hilsenrath who works for the Wall St Journal.

We only mention because if you ever see anything written by him, you can be able to know who the shill is by name.  And though nothing illegal occurs.. no money exchanged, etc.., to all who are among the inner-circles of the financial elite, this is common knowledge...

Want to read a heads-up on the latest mood of the Fed while seeing them portrayed as saviors wearing the 'white hat'?  Go to that source..

So we want to take a few moments in this post to show how propagandistic journalism works in a free-market, free-speech society.. 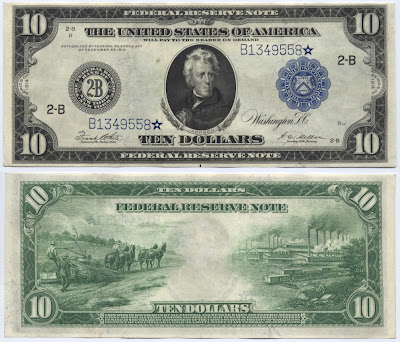 Hilsenrath's latest article for WSJ is entitled, "Fed Sees Action if Growth Doesn't Pick Up Soon".. It's a long article and we're not going to analyze it paragraph by paragraph... instead, here are some 'gems' (in blue font)..

Two lies in that opening sentence..

1)  The Fed does not care about high employment..  It cares that the stock market is dropping

2) The inference to 'taking new steps to spur activity and hiring' is Quantitative Easing 3, which in a way should be called QE5 since we've had 2 official 'QE' and 2 unofficial 'Operation Twists' and unemployment is still in the gutter.

No surprise though... those policies were meant to buy up toxic mortgages from banks' balance sheets and pump liquidity into the market so the Dow would artificially rise and encourage investment.

Once again, this is portrayed as a good thing; a positive.  It is not...

When the Fed buys the toxic debt, it does so by creating new debt i.e. public debt.  In other words, every penny the Fed spends is created from thin air and thus is added to the overall US National Debt which currently is somewhere around $16 trillion.

Also keeping interests super-low only encourages indebtedness and market speculation while Killing savers, especially retirees who are desperate to get enough interest to live on.  Its done intentional though-- the Fed doesn't want savers, they want more mom & pop investors...

So let's see, if you add the $267B being spent on this current 'Operation Twist' with QE 1 & 2, the Fed has pissed away $2.417 Trillion dollars (which is added to the National Debt) to inflate Wall St's value and bail out banks.

The reason its the Fed doing this and not Congress allocating the money is that after seeing how controversial and politically disastrous it was for sitting Congresspeople during the initial $700B TARP allocation in late 2008, a law was passed on Dec 31st while everyone's attention was focused elsewhere, passing off responsibility to the Fed to be the decider of re-capitalization. 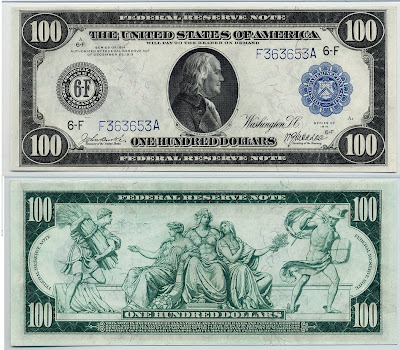 Did you know, if you took the $2.417 Trillion spent thus far by the Fed, which has done virtually nothing, and divided equally to 150 million of the poorest Americans, each individual would receive a check for $16,113.33?

Wouldn't That have stimulated the real economy better/quicker?

"Since January the Fed has been saying it doesn't expect to raise short-term interest rates until late 2014. The Fed could change its policy statement in September to move that date into 2015"

If you think that is good, you are delusional..

"A new round of bond-buying would be politically controversial so close to the November presidential election. During Mr. Bernanke's testimony last week, Democrats made clear they wanted the Fed to act and Republicans said it should proceed cautiously. The Fed chief has said repeatedly that the central bank will seek to do what is best for the economy, regardless of political pressure."

Written like a true spokesperson for the Fed..  What utter nonsense! The Fed is as politicized as any other institution:  Bernanke is a registered Republican originally appointed by George W Bush.   Former Republican Presidential candidate Herman Cain was once head of the Kansas City branch of the Fed..

Every member of the Fed has allegiance to one party or another, and the current President is desperate to win; desperate to show a rising stock market in late October-early Nov... And the Fed Chair appears every month before Congress... so to say the Fed isn't politicized, is foolish.

BTW, do you know how Fed Chairs are selected?  You'd think the President complies a list and makes the best choice based on qualifications, background, etc...    No.. the President is handed a list by the Fed--  They make up the list and the President picks a nominee from it...

This is why so many Fed Chairs have served under Presidents of both parties..  Because ultimately what does it matter?  The Fed picks who it wants and the rest is a formality..

The main point of this posting wasn't to demonize a specific person.  Sure Hilsenrath basically sells his soul daily to do the Fed Reserve's bidding in exchange for being their #1 go-to guy, but people in the profession of finance really don't look at it as 'bad'... Many actually believe the Fed's intentions are noble and many corporate media writers sincerely believe the tall-tales they spin will help the economy...

But we know better and out goals are pure and non-deceptive:  We simply want people to wake up and think for themselves... Nothing more, nothing less.
Posted by dsasR at 3:05 PM