This Day in History: July 20th 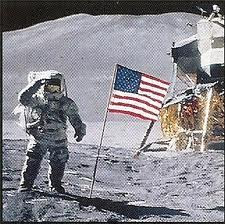 We were going to write another posting on Spain and the stock market dropping triple digits and how everyone who makes a living on Wall St are complete, utter Idiots...

We just will assume you know all this already..

From time to time, we enjoy perusing though the 'This Day in History' listings to see what events of importance occurred and July 20th is actually a more special and interesting day than most.

It was 43 years ago today that the first human being, Neil Armstrong, ever placed his footstep upon the Moon.  In the US, its celebrated in a patriotic way since the first astronaut to do it was an American, but really it was a celebration for all..

"One small step for man.. One giant leap for mankind"

And as magical it must have been to see this on one's TV set from the comfort of their living rooms, just think how long its been since Any person has stepped on the moon afterwards.

Eugene (Gene) Cernan became the last man to walk on the surface of the Moon during the 1972 Apollo 17 mission which took place in December of that year. 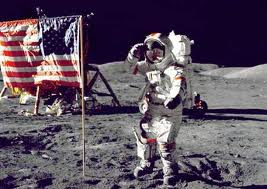 Not only has it been 40 years since we stepped on the moon, it doesn't look like it will be occurring again for quite a while.

The US space program is a mess-- we scrapped the space shuttle program for budgetary reasons and with both the US & global economies getting worse, its hard to imagine people living today witnessing another magical moment of human exploration as those alive in 1969 experienced.

1969 was a turbulent year, particularly in the US.  Many movies and documentaries made on it.  But in life nothing is 100% bad or good, and it would be simpleminded to reflect upon that time as being suffocated by doom and gloom.

2012 in many ways has been a year of tension for people.  We think the best way to describe it would be to term 2012 "The Year People Waited for the Other Shoe To Drop".  Maybe it will.. Maybe it won't.

If proverbial 'cans' can be 'kicked' far enough, then perhaps 2013 will become 'That' year.. or 2014.. and life post-Lehman will be one long, continuous blur.

Before we close this post, there were two other incidents which occurred on this day in history which we found fascinating and not in a good way; both occurring in the US during the Great Depression. 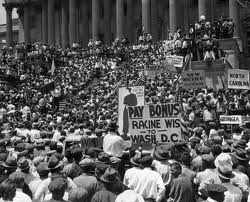 In 1932, in Washington, D.C., police fire tear gas on World War I veterans, part of the Bonus Expeditionary Force, who attempt to march to the White House.

In 1934, during the West Coast waterfront strike, in Seattle, WA, police fire tear gas on and club 2,000 striking longshoremen. The governor of Oregon also calls out the National Guard to crush the strikers.

Two incidents where the government-- one incident Federal, the other state and local, use their physical might to attack and hurt their own people for daring to express their redresses.

By the time of the Great Depression many of the veterans, like most Americans were out of work and struggling terribly.  The World War Adjusted Compensation Act of 1924 had awarded them bonuses in the form of certificates-- it bore a face value equal to the soldier's promised payment plus compound interest.

The certificates could not be redeemed until 1945, and the principal demand of the Bonus Army was the immediate cash payment of their certificates.

So instead of complying,  President Hoover directed the military to shoot gas canisters at the veterans and drove them out from their protest site using military tanks.  Two veterans died from gunshot wounds. 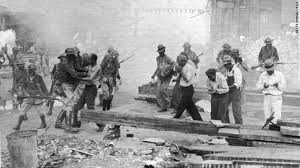 ~ US troops driving out the "Bonus Army"

So local authorities acted then as they would do today-- with force.

Back then as in today, anything one may need or desire to make a better life for themselves and their families is to be fought for.  No one in positions of power or wealth will give up an inch... or a penny.

In life, over time technologies may change.. hairstyles and clothing, etc..  but some things- just remain the same for each generation to experience and repeat until the following generation forgets.
Posted by dsasR at 1:16 PM