The Quandry of a Black American 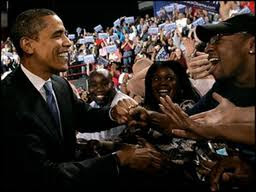 Here's a little political & economic riddle/quandary to solve:
What do you do when you belong to a specific racial minority group that voted in blind lockstep allegiance (94% loyal) in 2008 for a candidate because he was the same color, and yet as President has done Absolutely Nothing for you or your constituents?
What do you do when you feel pride that your race is in office and plan to blindly vote in lockstep again in 2012, but black unemployment is double that of whites and your community is crumbling from all directions?
What do you do when you know you're being taken advantage by the party & President you donated time, energy and money to, because as a racial group, no one fears or believes you'll vote Republican since you've been lockstep Democrats since FDR (80 years)?
You want to scream.. you're so infuriated!

What do you do when you are a black politician who has to be forced to curb his/her tongue because your constituents are are blindly loyal to the President and are still basking in a glow of "Yes We Can", while the reality is more like "Oh, Not Again!"
Here's California Rep. Maxine Waters, a key member of the Congressional Black Caucus (CBC) speaking in Detroit to students at Wayne University:

"We don't put pressure on the president...  Let me tell you why. We don't put pressure on the president because ya'll love the president. You love the president. You're very proud to have a black man -- first time in the history of the United States of America. If we go after the president too hard, you're going after us... The Congressional Black Caucus loves the president too.  We're supportive of the president, but we're getting tired, ya'll.  We're getting tired. And so, what we want to do is, we want to give the president every opportunity to show what he can do and what he's prepared to lead on. We want to give him every opportunity, but our people are hurting. The unemployment is unconscionable. We don't know what the strategy is... All I'm saying to you is, we're politicians...  We are trying to do the right thing and the best thing. When you let us know it is time to let go, we'll let go."
To some in the CBC, they must be thinking privately, oh if only that war-mongering Texan was still in the White House.. We wouldn't have to hold back our anger & scorn, and our constituents would love us for it rather than turn and attack us as race traitors. 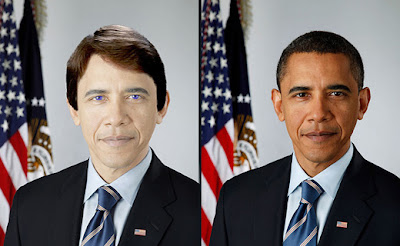 ~ Would the CBC be holding their tongues if Pres. Obama looked like the photoshopped photo on the left?  Quoting Macauley Culken in "Home Alone"-  "I don't think so"

This nonsense has got to stop if America has any chance in truly recovering from this Great Recession.  We have to stop thinking as individuals in this left-right paradigm as if the only solutions are A or B.  And we as individuals have to stop supporting people for public office solely because he/she is of the same race, religion, gender, ethnicity, sexual orientation or any other meaningless, inconsequential reason.

All of America is falling part.  ALL of it.   Some demographics feel it worse but the foundation cracks are everywhere.  If you genuinely love and support the President and feel he's doing a terrific job, Fine... that's your belief.  But if you feel he's doing a very bad job, you need to be vocal Especially if you're black.  Criticize him like you would Bush if he was still President and you were suffering the same economic miseries at this moment.

This is bigger than one person or one race of people.. Right now there is a field of Republican candidates who are either completely clueless about the economy or outright liars when they refuse to raise taxes on the wealthy elite while making working people, the sick and indigent pay the bills for the bailouts.  And the President is a economic "trickle-down" Wall-St Dem. who has no interest in helping the black community directly yet knows he has your unquestioned support.