Many months ago A&G wrote a detailed 4 part history of financial "panic" in US History.  Today, August 24, 1857 marks the 154th Anniversary of the true beginning of the Panic of 1857 which had importance in being a major prelude to the Civil War (In spite of everything your high school history teacher taught you, the US Civil War was fought over economics, not morality of slavery). Most people have no clue of this event, so we're reposting.

See if you can detect any similarities between this period's economic collapse and what the nation and globe is suffering with presently.  Here's one similarity to start:  Investors then as in today, were greedy, soulless parasites always looking opportunistically to make a buck.  Any other comparisons, you have to find on your own...

This was a sudden downturn in the economy with a general recession first emerging late in 1856, but the successive failure of banks and businesses that characterized the panic began in mid-1857. While the overall economic downturn was brief, the recovery was unequal, and the lasting impact was more political than economic. From its peak in 1852, to its trough in 1857, the stock market declined by 66% and the panic/depression spread to Europe, South America and the Far East. No recovery was evident in the northern parts of the United States for a year and a half, and the full impact did not dissipate until the American Civil War.

The Panic ended a period of prosperity and speculation that had followed the Mexican-American War (1846–1848) and the discovery of gold in California in the late 1840s. Gold pouring into the American economy had inflated the currency. Changes in worldwide economic trade, caused by the Crimean War  between Britain and Russia, had pushed American firms into a precarious worldwide market. After a large increase in state banks in the early 1850s, by July 1856, banks began to lend far more money than they could back up in money even as deposits began to fall.  By October of 1856, depositors started runs on banks which motivated the decision of British investors to remove funds from U.S. banks, and raised questions about overall U.S. economic soundness.  Adding to this, the collapse of land speculation programs that depended on new rail routes, ruining thousands of investors.

Investor confidence was also shaken in mid-September when 15 tons of gold were lost at sea in a shipment from the San Francisco Mint to eastern banks. The gold and more than 400 lives were lost when the SS Central America sank during the North Carolina Hurricane of 1857.  Lastly, what added greatly to the economic tensions of the time was the Dred Scott case with the Supreme Court's ruling in 1857 that when a slave entered a free state with his master, he/she was still the property of his/her master and thus still a slave. The Court's decision threatened to open up all western territories to slavery, specifically where southern businessmen could use their slaves as free labor and undercut northern businessmen who were forced to pay pennies a day to immigrants and children laborers.  The Dred Scott decision prompted the bonds of east-west running railroads to plummet in value, which in turn helped motivate a run on the major New York banks. 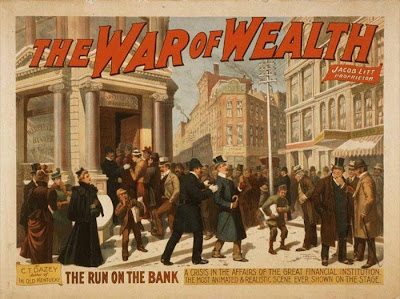