Bernanke speech- That was it? 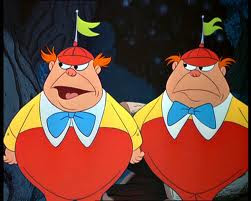 So what happened?  What happened in this 'Ohh Sooo Important!!' Ben Bernanke speech that all the Investors in Soulless-land were pooping on themselves in anticipation of??

1) No QE coming this month (Investors treat that as code for QE eventually)
2) US on track for long-term economic growth (a Total Lie)
3) Congress needs to do more (Duh!)
4) Sept 20th's meeting will last 2 days instead of 1 (So what?)

That was it folks.

Bet the market must be infuriated right?

But why??  Didn't A&G say there would be a dramatic drop if investors did not get stimulus announcement of some kind?   Actually-- no, we didn't.

The other day we paraphrased a quote we heard from a market expert which we felt was quite accurate amid all the non-stop market manipulations.   He basically said the market had been going up Monday through Wednesday to hedge positions ahead of the Friday speech, and the key was Thursday..  if the market dropped, then it would treat anything Bernanke said as a positive and spike up based on the level of good news.  But even if there was no news, it would rise.  And had the market risen on Thurs, it would have dropped today no matter what...

It dropped Thursday..  it rose Friday.

The real interesting question is what will the market do on Monday, post-hurricane after it has a weekend to digest the fact that Bernanke made no commitments or promises, and the speech said nothing new?

Eventually this market will drop and Investors will be getting the punishment they've been delaying since 2008.. the only question is "when?"

Did anyone expect the Fed Chair to say honestly that this nation is still muddled in a 4year and counting Recession with no real sustainable growth, job creation or job stabilization for years?  You and I can speak honest- we won't create panic and bank runs.  No politician can do so even if he/she wanted to.  And yet like little Children... Children!!.. Investors listen to their 'Mommy and Daddy' government leaders for comfort and words of encouragement.