What will the bearded man do? 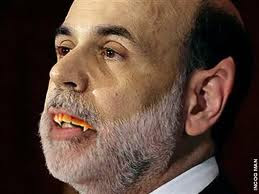 One thing I try very hard to avoid is making this blog repetitive.  I'd like to believe that unlike most of the general public, loyal readers to A&G "Get it" by now; that even if the reader is not necessarily into markets or finance, he/she understands via this blogsite how Deeply corrupt global finance is.
But on occasion, repetition is unavoidable.
Banks, financial entities, corporations, politicians of all nations work in concert to do two things: siphon money up from the everyday person into their pockets and to serve their collective master- the Investor.  This is not a new phenomenon.  The need of a select few to hold massive amounts of wealth while depriving the bottom 98% of more than breadcrumbs is an enterprise that pre-dates Jesus.  What has changed and is a recent phenomenon is how openly transparent this criminality is.
The entire financial world is awaiting with baited breath later today to hear what the bearded bastard, Ben Bernanke is going to say. Right now Asian markets are choppy because they can't figure what he might say.  Really there's only one thing he could say that would make the cockroaches and cock-you-know-whats in Investor-land happy: More Quantitative Easing.   Anything less than that statement tomorrow or similar promise for more stimulus, and the markets will drop.
A junkie will always need the next 'fix'.  And if that junkie has to be nice and polite, or violent or threatening, he or she will use every trick in the book to get its way. A junkie values no one or nothing- it will cheat, lie, steal, whore and kill to get that 'score'.  The stock market is no different.  Let me repeat this: the Investor is No different than a common, filthy strung out junkie, and the global markets as they exist is not based on any economic reality. 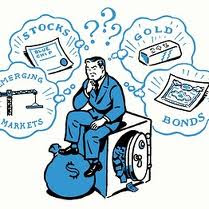 The United States is a complete economic mess and deserves a credit rating far lower than the AA+ the S&P lowered it to last month but the US are master bullies and Fitch's & Moody's do not have the collective 'balls' to follow Standard & Poor's lead.  Europe is in Horrible shape financially where Germany basically is being called upon to bail out the rest of the European Union while its economy drops from productive to flatline in a matter of 1 calendar year.  Asia is also in terrible shape-  Japan is in economic malaise, the yen is so Strong, the government is figuring every way possible to artificially weaken it, and its Prime Minister has recently announced his resignation.
The global economy is extremely weak and fragile.  And these artificially propped up stock markets have been allowed to make a financial Killing for over two years thanks to national treasuries of various nations being counter-directed from the people to the corporations and banks.  In the US and Britain, they push this warped indoctrinated logic that strong companies and strong markets = strong nation & strong sovereignty.  Not sure if other nations push that nonsense, but it is a lie.  A bold-faced Lie.  The strength and vitality of a nation comes from its people, not its corporations.
So what will Bernanke do later today?  Honestly I don't know.  I know what I hope and what I fear.  I know investors are as Evil as they come and they will manipulate conditions to get their way.  If not today, then soon.  A junkie Will get their fix and will not stop.
OK, so what happens if QE3 or some other stimulus is announced?
1)  The US National Debt will go up.  If QE3 is $1Trillion, the US National Debt will ultimately rise by that amount
2)  The dollar continues being devalued meaning it costs more dollars for Americans to buy all goods and services, while corporations dependent on exports make greater profits.  It also escalates a currency war with China and the rest of the world to see which nation can weaken their currency the fastest.

3)  The prices of food, gasoline, electricity, clothing and every other life essential which is a publicly traded commodity will increase due to the increase in free money which encourages Investor speculation.
4)  The markets go up and down and up and down until the QE3 runs out and the markets drop again and Bernanke and some other Fed person offers QE4 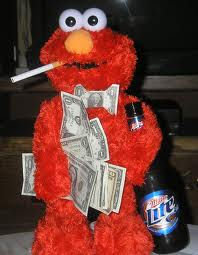 ~ Elmo LOVE Investing.. HaaHaaHeeHee
And what happens if QE3 or some other stimulus is not announced?
Markets will drop.. and drop..then rise a little..and drop some more.. and everyone will be scared; the common people will scream to their Congress and President "Please do something to save the markets!!  My 401k is in there!!" and then Bernanke will have full political cover because to many, its, "Let the government spend billions and trillions to save my personal wealth of thousands!"
No matter what happens though, it won't prevent the global markets from tumbling this autumn.  Because the rot and decay is bigger than one nation.  And no one; no nation anywhere around the globe punished the wrongdoers or tough legislation to ensure 2008 doesn't happen again.
All that said, my personal hope tomorrow is Bernanke say nothing of value and let the investors stew in the dirt juices of their anger.
Posted by dsasR at 1:39 AM