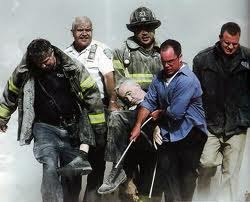 Not an economic posting but too offensive for me to ignore

AP News:   "They were the first ones on the scene when the World Trade Center towers fell on September 11, 2001, but ten years later, the first responders are being told that they will not be invited to take part in this year's tenth anniversary ceremony at Ground Zero.  The city announced earlier this week that due to security and space issues, there would be no room for the first responders. Instead, they'll be invited to a private ceremony on a different date.

Retired NYPD officer Anthony Flammia told FOX News, "I'm absolutely disgusted." He said the exclusion was "a total disrespect to the responders ... it's very easy for them to make the space for us."  Flammia said it was "up in the air" as to whether he would go to another ceremony at a later date.  He added his health continued to deteriorate as a result of being on the scene at Ground Zero.

The office of Mayor Michael Bloomberg said the focus at the September 11 ceremony would be on accommodating  the families of the nearly 3,000 people who lost their lives that day in New York, Washington and a Pennsylvania field..."

Perhaps next time, first responders should think twice.
Posted by dsasR at 2:46 PM