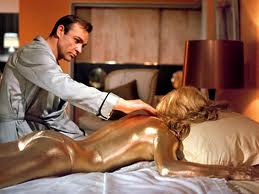 This is a posting about gold, but before we start talking about something real, let's focus a moment on something completely pretend..

Stocks keep going up.. based on nothing real other than optimistic fragments of data that when added up still do not amount to jack-squat.  I can't (and won't) keep writing endlessly on it.  After Labor Day, the market will drop, especially as it gets closer to the Fed's September 21st meeting.

According to the article, unemployment rates fell in 193 large metro areas in July, rose in 118, and were flat in 61 which I guess the market took as a good thing and used as an excuse to invest.  The headline is pretty positive for sure...

Funny part comes in paragraph 3 -- "The biggest monthly decrease was in Morgantown, W.Va. The unemployment rate there fell from 6.6 percent in June to 5 percent in July, mostly because people stopped looking for work. The government only counts people as unemployed if they are actively seeking work."


And there you have it...  Ta Da!   Wonder how many of those 193 large metro areas saw a drop in unemployment specifically based on people feeling hopeless and despondent, and simply giving up?

Continuing... "In July, the U.S. economy added 117,000 net jobs... the economy needs roughly twice that number of jobs to significantly lower the unemployment rate...  The economy expanded at an annual pace of just 0.7 percent in the first half of the year. That's the weakest six months of growth since the recession officially ended two years ago."

Well.. I mean.. you know.. the recession didn't um.. ever "end" but AP is doing such a find job today I won't harp too much on this media Lie.

If you want to truly know the state of the US economy, the simplest, easiest way is to follow the price of gold.   To many, gold is used as a hedge bet, a way to invest their money into something real and tangible when they don't trust placing their money anywhere else.  When people are scared about the future and feel no confidence in the government, gold prices rise in value.

Shows you a lot of people know the truth about where the economy is headed.

Just something to think about..
Posted by dsasR at 1:38 PM