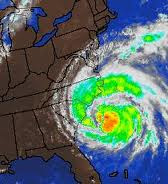 ~ Hurricane Irene:  Did you make money off it?

As of this moment, what was once Hurricane Irene is now a small patch of isolated storms in northeast Canada.    And though some snicker that the media coverage was overblown or state governments were hyperactive in their insistence that people evacuate, public transportation close, etc, Irene did permanently end the lives of at least 20 human beings who were living and breathing as of Friday, leave many without power for potentially a week or more, and will cost somewhere around $7billion based on original insurance estimates.

But this is not a hurricane blog and Irene is no more..

While it was going on last night I turned on various news channels like CNN and MSNBC- they had weather people stand in the middle of winds and hard rains to show us what was going on.  I think deep down they had more fun standing out in the mess than anyone else had watching it.  And there were human interest stories about people escaping death from falling trees and such.  All in all, your basic hurricane coverage...

And then I turn on CNBC.   They had a different perspective.

CNBC's concern was the markets.. would they open?  Would the floods prevent people from getting to work at GoldmanSachs, JP Morgan Chase and all those other 'wonderful' corporations?  CNBC's anchor interviewed representatives of ConEdison, who provides electrical power for region to see how much power lost and how quick to restoration, to gauge whether daytraders would still be able to buy/sell on monday from their homes.  CNBC then interviewed airline experts- how much would the industry lose due to cancellations, and made economic forecasts for best/worst case due to comparitables like how airlines handle snowstorms.  Later on, experts came on to analyze the investibility of insurance companies, which most saying even though they'll be paying out a lot now, it will allow them to dramatically raise their rates later meaning more cash flow and a good investment buying opportunity.

And I sat and watched... and thought of the family and friends I have living in the affected region suffering through the category 1 Hurricane whom I could not get into contact with all night due to power loss.  And from there I thought of CNBC's "priceless" coverage of the tsunami that affected Japan in March, in which many at the network screamed incessantly at the time what a Wonderful buying opportunity this presented.

And I realized more than I thought possible before the weekend, how much I despise the financial media, and and investors/traders.   And how deeply a major stock correction is Needed where these people lose A LOT of money in the process after 3years of scavenging on the financial 'bones' of the bottom 98%

When the market drops, you should cheer it, not feel sadden.

Sociopaths feel no emotional connection to anything, and because they feel no guilt for not caring about a person, persons or populace, there's really no effort to hide the self-absorption into money-making.

Try turning on CNBC or Bloomberg the next time something really tragic or terrible occurs in the US or any other part of the world.  You will see callousness glorified because to them, Everything is a buying opportunity.  And if you're not part of the investment 'game', to them you are Nothing.

I can just imagine how the Monsters in financial media would treat another 9/11 if it heaven-forbid occurred...  And if you think I'm being hyperbolic, then you don't truly know how an investor thinks.
Posted by dsasR at 1:04 AM